Gender Identity Goes Beyond Male and Female: 33 Gender Terms and Their Meanings That You Probably Didn’t Know Of!

These gender identities have developed into a separate vocabulary which is not of common usage. But given the awareness that is created about the trans community, it is important to understand all gender terms. 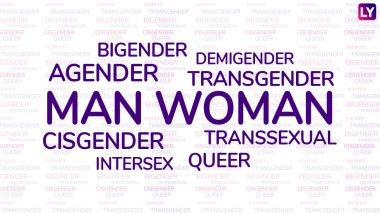 The world looks at the concept of gender in just two words- masculine and feminine. Not to blame, but that's how the basic understanding of concept divides between a man and a woman. A certain range of characteristics is known to distinguish between masculinity and feminity. But as more and more exposure has come in, the transgenders are into the discussions. Gender is no more male and female but an option of "other" added to it. However, only one word "other" does not still be all-inclusive. There are several gender terms that are distinct in its every way. The word transgender is not encompassing and so it is important to know the new gender terms that have come up. Popular dating app Tinder introduced 23 new genders, which puts a light on how many different gender identities exist.

These gender identities have developed into a separate vocabulary which is not of common usage. But given the awareness that is created about the trans community, it is important to understand all gender terms. Transgender may be within common usage and people would be aware of. But there are a total of 33 gender identities that exist. Pansexual, Demisexual, Autosexual or Gynosexual, Were you Aware About These New Sexual Orientations?

33 Gender Identities That You Should Know Of

Woman: A person born as a female, and who identifies as female.

Man: A person born as a male, and who identifies as a male.

Agender: The term literally means without gender. It can be looked at not having a gender identity at all. They may not align with being a man, woman or any gender in particular. They would be genderless to describe.

Bigender: Someone who identifies with being both a man and woman would be called bigender. A bigender person may feel one side is stronger over the other.

Intergender: These people have a gender identity that is a middle between male and female, it could be a mix of both.

Binary: Gender binary clearly classifies between sex and gender being disconnected. It views gender into two different identities as a man or a woman or male and female.

Non-binary: Any other gender that does not come under a male of female or man/woman is described as non-binary gender.

Cisgender: It refers to the people who identify with the sex assigned to them at birth. The exact definition of cisgender is "a gender identity or perform a gender role society considers appropriate for one's sex".

Cis Female: Cisgender female is a female who identifies as a woman.

Cis Male: A cisgender male is a male who identifies as a man.

Gender fluid: A person with gender fluidity does not identify within a single gender or a fixed idea of gender. Their idea of their gender may change with time and context.

Gender Non-Conforming: A gender non-conformist person who does not identify with either the male or female genders.

Demigender: The term demigender includes non-binary gender people who have a partial connection to a certain gender.

Demigirl: A person who identifies being with a woman and has certain feminine characteristics. This person could have been born a male even.

Demiboy: A person who identifies being with a man and has certain masculine characteristics. This person could have been born a female even.

Pangender: A pangender is someone who identifies with more than one gender.

Polygender: It translates to 'many genders.' These people experience many gender identities, may be simultaneously or at varying times.

Queer: Queer is a collective term that encompasses all fluid identities and orientations.

Androgyne: A person who identifies neither with being masculine or feminine is called as an androgyne.

Androgyny: This is a combination of both male and female characteristics. It can apply to someone's gender identity and sexual identity both.

Trigender: Any person who shifts between a male, female and the third genders is called as trigender.

Neutrois: A non-binary gender form is considered to be a neutral gender.

Genderqueer: A genderqueer person is one who does not subscribe to conventional gender distinction but identifies with none. So this group of people may not fall into male or female but both or outside of these categories altogether.

Transgender: Transgender is a wide umbrella encompassing people who have their gender expression different from cultural and social expectations, related to their sex at birth. A Glossary of Terms Associated With the LGBTQ Community.

Transgender man: A person who was born as a female but now identifies as a man. They may have undergone a surgery to reassign their gender. But a man who may not have got operated can still identify as a female gender.

Transgender woman: A person who was born as a male but now identifies as a female. They may have undergone a surgery to reassign their gender. Regardless of the surgery, a female can still identify as male.

Trans person: A person can be transsexual or transgender is a trans person. A trans person emotionally and psychologically identifies with the opposite gender than the one they are born with.

Trans Man: A trans man is someone who was assigned female at birth, but now identifies as a man.

Trans Woman: A person who was assigned male at birth, but who identifies as a woman.

Transsexual: Transsexuals are people who transition from one sex to another. They undergo surgical procedures to transition into their desired sexual identity- a male to female and a female to male.

Intersex: A person who has an anatomy of both a male and a female is referred to as intersex. So for example, this person will have an appearance like a female but will make male like anatomy on the inside.

These are the broad classifications of various genders that exist other than the normal perception of a man and woman. As more and more awareness and exposure about the trans community grows, it is important to know a particular term refers to and they cannot be used interchangeably.

(The above story first appeared on LatestLY on Nov 14, 2018 01:17 PM IST. For more news and updates on politics, world, sports, entertainment and lifestyle, log on to our website latestly.com).