Pansexual, Demisexual, Autosexual or Gynosexual, Were you Aware About These New Sexual Orientations

Look at some of the gender sexualities which have been included over the years. 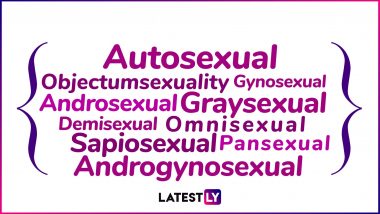 Pansexual: Pansexual includes sexual attraction to everyone. So those who feel they are sexually, emotionally or spiritually capable of falling in love with all genders are pansexual. These people have an attraction

to others regardless of the gender identity or biological sex. They are open to someone who is male, female, transgender, intersex or genderqueer. Some pansexuals do have physical preferences. The identity is

used merely to express the openness and fluidity to people of all gender.

Omnisexual: Omnisexuality is commonly used as pansexuality but there is a slight difference. While pansexual people are gender-blind, omnisexuals are not. They see and acknowledge the gender of the other person but do not care about it. If they are attracted to someone they will note the gender but that will not matter for maintaining a relationship.

Gynosexual: Gynosexual refers to someone who is attracted specifically to females. Here the concerned person's gender is not into consideration, so it could be a female itself or a transgender, but has sexual feelings only towards a woman.

Demisexual: An emotional connection is a primary factor for many people to maintain a sexual relationship. But demisexuals are specifically those who look for the strong emotional connect first. A demisexuality may be commonly seen in most of the romantic relationships people have, but it is not confined to just those. Demisexuals do not hold back from sexual relations but they are unable to have that attraction unless they form a close relationship with the person.

Object sexuality: Objectumsexuality refers to sexuality focused on particular inanimate objects. These individuals may feel a strong attraction, love or a sense of commitment to certain things or structures. This kind of sexuality has been addressed in certain pop culture movies and series.

Androsexual: Anyone who has sexual feelings towards males are androsexuals. They feel sexual attraction towards the people who may or may not have any variation of gender, so they may not be of opposite genders to be attracted towards males.

Androgynosexual: Androgyosexuals are people who have a sexual attraction to both men and women but specifically to those who are androgynous in appearance. An androgynous appearance is someone who appears partly male and female. Androgynous people have characteristics of both the sexes and those attracted towards them are known as androgyosexuals.

These are some new phases of sexuality which have entered the sexual orientation conversations but are still not widely talked about. Milennials like to call themselves sapiosexuals, but there are also common graysexuals existing within. The existing common labels of heterosexuals, homosexual (lesbian, gay) and transgender were not enough and inclusive of sexual pleasures derived from 'other specific attractiveness.' The process of identifying with where exactly you belong can still be confounding to some. Afterall what turns you on can also differ with passage of time.

(The above story first appeared on LatestLY on Mar 27, 2018 06:49 PM IST. For more news and updates on politics, world, sports, entertainment and lifestyle, log on to our website latestly.com).