Acquired Immunodeficiency Syndrome (AIDS) is one of the most dreaded entities that modern medicine has ever had to tackle. 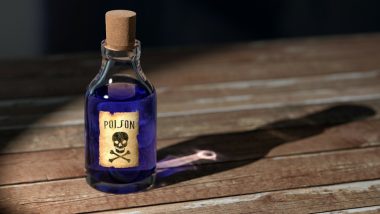 In a horrific incident, a 37-year-old man who was a daily wage worker killed his 2 daughters by mixing poison in the food and thereafter consumed it himself. On Saturday night in a village near Erode district's Andhiyur committed the tragedy. Sikkaran was suffering from the final stage of HIV and had lost all hopes because of it. 18,081 HIV Positive People in Mizoram: MSACS.

The police told Deccan Chronicles that he was separated from his wife soon after the onset of HIV/AIDs and also took both his daughters along with him. Sikkaran took Sudha, 15, and Mekala, 10 to an Amman temple near Andhiyur to kill their daughters before killing himself. He soon called 108 for an ambulance as he saw his daughters struggling for life after eating the poisoned food that he had fed them. Soon they were taken to the hospital where 10-year-old Mekala succumbed to death whereas Sikkaran and Sudha were sent to Erode government hospital where Sudha succumbed to the poison. A case of murder and suicide has been registered against Sikkaran by Andhiyur police.

India and the Stigma attached to HIV/ AIDS

Various studies have suggested that despite so many awareness campaigns and steps taken by the government the stigma attached to HIV and Aids don't seem to leave the society. A study says, "HIV/AIDS-related stigma is recognised as a major barrier to HIV prevention efforts and an impediment to mitigating its impact on individuals and communities."

Another study concluded that along with stigma a lot of wrong information about the disease also spreads because of HIV/AIDS being such a hush-hush topic. The study says,'Stigma among the general public was mostly due to fear of contracting the illness. Stigma does exist to significant degrees among the educated people, which was suggested by about 45 percent of the participants being willing to undergo the HIV test. There is a need for greater attempts toward making information regarding HIV/AIDS available to every individual of the society.

'Acquired Immunodeficiency Syndrome (AIDS) is one of the most dreaded entities that modern medicine has ever had to tackle. Adult HIV prevalence in India is approximately 0.36%, which corresponds to an estimated 2 to 3.1 million people living with HIV in the country'

(References: Awareness and Attitude of the General Public Toward HIV/AIDS/ The social impact of HIV/AIDS in India./A systematic review of HIV/AIDS-related stigma and discrimination in India: current understanding and future needs.)

(The above story first appeared on LatestLY on Sep 24, 2018 05:52 PM IST. For more news and updates on politics, world, sports, entertainment and lifestyle, log on to our website latestly.com).