As many as 13 lakh people in Telangana were found to have high blood pressure (hypertension) during a survey which so far covered 90 lakh people, Health Minister T. Harish Rao said on Tuesday. 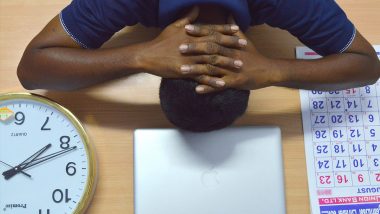 Hyderabad, May 17: As many as 13 lakh people in Telangana were found to have high blood pressure (hypertension) during a survey which so far covered 90 lakh people, Health Minister T. Harish Rao said on Tuesday.

He said every citizen above 30 years of age is being screened for Non-Communicable Diseases (NCDs) during the ongoing survey across the state. He said in the next three-four months, the entire population will be covered. World Hypertension Day 2022 Date, History & Significance: What Are the Dangers of High Blood Pressure? Everything You Need To Know

The health minister was speaking at a private hospital in Hyderabad, whose survey also revealed that the number of people suffering from hypertension increased after COVID-19 pandemic.

Minister Rao said under the state-wide NCD survey, people were being screened in primary health centres, area hospitals and other government-run healthcare centres.

"This is being taken up as a special drive in which ANMs, ASHA workers, PHC doctors, and community health centres are working like a team. We are not only screening the people but giving free medicines to those detected with hypertension and diabetes," he said.

The health minister revealed that the state government has allocated Rs 33 crore for screening and medicines under the special drive.

Though hypertension is a minor ailment, negligence leads to bigger problems and may even cause death. He voiced concern that many people were losing lives due to the complications caused by hypertension.

"If the problem is not diagnosed on time and medicines are not taken regularly, this could affect functioning of kidneys, liver, heart, brain and other vital organs leading to even death," he said.

The health minister underlined the need for regular tests for blood pressure and diabetes. He attributed the rise in the incidence of NCDs to stress, food habits and lifestyle.

He said that people should engage in regular physical activity by practicing yoga, walking or playing sports.

(The above story first appeared on LatestLY on May 17, 2022 04:32 PM IST. For more news and updates on politics, world, sports, entertainment and lifestyle, log on to our website latestly.com).