Rahul Bhatt turns 38 years old on January 24, 2020. He is a renowned celebrity fitness trainer and son of film director Mahesh Bhatt and Kiran Bhatt. He has also participated in a famous TV reality show Bigg Boss in the year 2010. Rahul recently came into limelight after helping Aamir Khan transform his body during the shooting of Dangal. 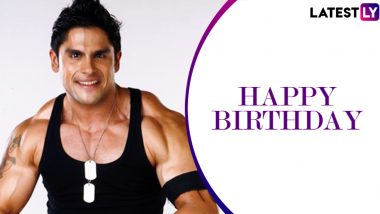 Rahul Bhatt turns 38 years old on January 24, 2020. He is a renowned celebrity fitness trainer and son of film director Mahesh Bhatt and Kiran Bhatt. He also participated in the famous TV reality show Bigg Boss in the year 2010. However, Rahul garnered a lot of eyeballs after he helped Bollywood superstar Aamir Khan transform his body during the shooting of Dangal. Aamir had to lose a great amount of weight to look extremely aesthetic in one of the scenes of the movie. On occasion of Rahul Bhatt's birthday, let's take a look at his valuable fitness tips which will indeed help you adopt proper training. Sahil Khan Birthday Special: Workout & Diet of India’s Official Aesthetic King (Watch Videos)

Just like every other celebrity, Rahul Bhatt also went through the bad phase of his life, where his alleged friendship with David Headley got into controversy. Headley, who is a spy, conspired in plotting the 26/11 attack on Mumbai in the year 2008. However, later Rahul Bhatt got out of this, and from then, he has been leading his life successfully. Rahul Bhatt, being a son of film director, could have chosen acting, however, he wanted to live his passion, hence, chose fitness. During his teenage days, he was quite overweight, where the trainer revealed that he chose the wrong way to lose weight. After that, Rahul studied and educated himself in this field, which bought him into hardcore fitness.

Indeed passion, perspiration, perseverance, patience and a good mentor play a major role in achieving fitness goals. There has been no looking back after entering into an exercise regime.

Rahul Bhatt clearly says that there is no substitute for hard work and one has to put in a lot of effort to live their passion and dream. Rahul Bhatt also leads a disciplined lifestyle, he never drinks and smokes. He also avoids late-night parties and just spends maximum time training and with his clients. We wish Rahul Bhatt a very Happy Birthday.

(The above story first appeared on LatestLY on Jan 24, 2020 12:38 PM IST. For more news and updates on politics, world, sports, entertainment and lifestyle, log on to our website latestly.com).