Shilpa Shetty is indeed a fitness icon for many of us. Her exercising post on social media inspires her fans to workout and stay fit. With growing time, Shipa has started to look prettier and fitter. Shilpa Shetty mostly performs yoga and also dedicate time to weight training and cardio to stay in the best shape. Shilpa initially started yoga to get her neck pain cured, eventually, she got fond of it and now she credits her various asana for her hot body. 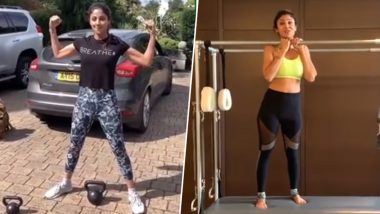 Shilpa Shetty is indeed a fitness icon for many of us. Her exercising post on social media inspires her fans to workout and stay fit. With growing time, Shipa has started to look prettier and fitter. Shilpa Shetty mostly performs yoga and also dedicate time to weight training and cardio to stay in the best shape. Let us unlock Shilpa Shetty's diet and fitness plan which makes her the one of the fittest in Bollywood. Shilpa Shetty Kundra Is Serious Fitness Goals on the Newest Cover of Femina.

Shilpa Shetty, also known by the name of Shilpa Shetty Kundra after her marriage made her debut in the film industry from the movie Baazigar in 1993. She received appreciation for her role in Main Khiladi Tu Anari (1994) and Dhadkan (2000). Shilpa became a global figure after winning the 2007 British reality television series Celebrity Big Brother 5. Now let us discuss her workout routine and diet plan.

As per the reports from gyanunlimited.com, Shilpa Shetty workout five days in a week. In this, she dedicates two days to Yoga, Pranayam and meditation, the other two days for strength training exercises and one day for cardiovascular exercises. During her strength training days, she lifts weights and trains to toned all her muscles. Shilpa initially started yoga to get her neck pain cured, eventually, she got fond of it and now she credits her various asana for her hot body.

Heard a lot about how useful it is to improve flexibility and to strengthen the muscles, your core, posture, and breathing. Tried it for the first time... Whoaaaaaa!!! Really enjoyed learning this technique on the Reformer machine. Train with intention and consistency, and you will achieve your desired goal. #learner #student #Pilates #Reformer #stretch #core #legs #abs #gratitude #newtechnique #instaworkout #sweating #strong #swasthrahastraho #health #love #passion #shawellness

Circuit training... 3-and-a-half-minute killer set made concise to #instafit. 3 sets of this and legs are jelly. Sore today, Strong tomorrow 💪 Didn’t stop even when Bruno, our German Shepherd, wanted to be a party pooper😅He’s adorbs! @bencolemanfitness you are killing me 🔥👏🧿 #mondaymotivation #killerworkout #circuittraining #legday #fitness #passion #swasthrahomastraho #healthfreak #breathe

You don’t stop brushing or eating on a holiday so why stop working out! Make Fitness a “WAY”of life , not a “WHY” in life 💪💪 and I practice what I preach..😇🧿 Thankyou @bencolemanfitness for keeping me on track here. Killed it today 😅 #mondaymotivation #planks #core #workout #londondiaries #keepitgoung #enjoyfitness #gratitude #training #instafit #swasthrahomastraho #ssapp

Family that trains together stays healthy together.. this is the best gift I could ask for.. this is my #competition my 7 yr old 😅🤦🏻‍♀💪🧿 Want to also thankyouuuu all for the good wishes and love... want to return it back with more so as my Birthday return gift. After successfully launching on IOS , today I launch @shilpashettyapp live, on Android. Please download (link in bio) and subscribe to get on track with good Health. Hope this app will help you acheive your fitness goals with your family🤗💪♥️ With Gratitude SSK #swasthrahomastraho #ssapp #birthday #fun #family #fitness #motivation

Shilpa Doing Triceps Dips With Her Son Viaan on her lap

Today on the Yoga menu is Dynamic Suryanamaskar... the next level... trying to burn two big chunks of #Mysorepak from yesterday’s menu 😅🧘🏾‍♂💪 How to do it... Hasta Uttanasana Padahastasana Ashwa Sanchalanasana Utthita Chaturanga Dandasana Ashtanga Namaskarasana Bhujangasana Parvatasana Shirshasana Utthita Chaturanga Dandasana Ashtanga Namaskarasana Bhujangasana Parvatasana Ashwa Sanchalanasana Padahastasana Hasta Uttanasana Pranamasana From not being able to do the “Sirsasana” to doing it in the Suryanamaskar flow is a feat for me. So happy I can nail it now. This flow is like a full body workout, strengthening, toning and stretching your body and imagination. #mondaymotivation #nothingisimpossible #yoga #yogi #discipline #suryanamaskar #advance #practice #happiness #ssapp #simplesoulful #comingsoon

As per the report of gyanunlimited.com, Shilpa Shetty prefer eating a balanced diet with wholesome foods. She starts her morning by drinking amla juice followed by porridge and tea with brown sugar for breakfast. Shilpa likes to eat carbohydrates which are low in a glycemic index like brown rice, brown bread, brown pasta and brown sugar. Her meals include wholesome foods like salmon, turkey, veggies, etc. She hardly eats snacks between her meals and prefers to drink green tea instead of cold drinks.

Shilpa Shetty takes protein shakes post-workout along with eight black raisins and two dates. The Bollywood Diva finishes her dinner by 8 pm, as she believes that the last meal should be finished three hours before sleeping for better digestion.  Her dinner mostly includes soup, salads and chicken dish.

Shilpa Shetty fitness lifestyle should motivate you to move towards the gym and shed some weights. Her fans would want Shilpa to post more fitness videos and inspirational workout messages on her social media account.

(The above story first appeared on LatestLY on Jul 31, 2019 12:54 PM IST. For more news and updates on politics, world, sports, entertainment and lifestyle, log on to our website latestly.com).