What is Guillain-Barré Syndrome? From Symptoms to Causes, Here is Everything You Need to Know About The Autoimmune Neurological Disorder

Guillain-Barré syndrome or GBS is a neurological disorder in which the body's immune system attacks its nerves. In this condition the immune system attacks the network of nerves located outside the brain and spinal cord of the patient's body, also called the peripheral nervous system. Guillain-Barré syndrome is a rare auto-immune disorder. The exact cause of the disorder has been not ascertained. 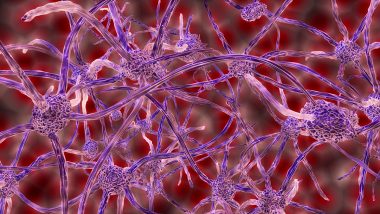 New Delhi, July 13: Guillain-Barré syndrome or GBS is a neurological disorder in which the body's immune system attacks its nerves. In this condition the immune system attacks the network of nerves located outside the brain and spinal cord of the patient's body, also called the peripheral nervous system. Guillain-Barré syndrome is a rare auto-immune disorder. The exact cause of the disorder has been not ascertained. It may usually begin weeks after respiratory or gastrointestinal viral infections. Surgery may occasionally lead to the disorder. FDA May Announce New Warning on Johnson & Johnson COVID-19 Vaccine Related to Guillain-Barré Syndrome, a Rare Autoimmune Disorder: Washington Post Report.

An increased cases Guillain-Barré syndrome have been reported in the people who suffered from Zika virus across the countries. Recently the US's Food and Drug Administration has warned of a potential GBS with Johnson and Johnson coronavirus vaccine. There is no known cure of the condition however certain treatments can help reduce the severity and speed up the recovery for the rare auto-immune disorder. Scroll down to know more about Guillain-Barré syndrome. Post COVID-19 Symptoms: 40% of Recovered Patients Experience Post Coronavirus Symptoms Like Insomnia and Neuropsychiatric, Says AIG Hospitals Survey.

What is Guillain-Barré Syndrome?

Who is GDB Named After?

GBS is named after Georges Guillain and Jean Alexandre Barre, who discovered the characteristic feature of the disease in 1916. The characteristic they discovered was an increased level of protein in cerebrospinal fluid with normal cell count, as per AMA Journal of Ethics.

What are the Symptoms of  Guillain-Barré Syndrome?

Patients begin to feel weakness and tingling in the feet and legs which spreads to the upper body as well. In some cases the symptoms start in upper body and then move downwards. Other symptoms include pricking sensations in feet and hands, difficulty in chewing, swallowing as well as speaking, problems with digestions and bladder control. People may experience difficulty in vision and eye muscles. Abnormal heart beat or blood pressure. Severe pain particularly at night. Patients may also experience unsteadiness and coordination problems. In severe cases, the person may even get paralysed.

What are the Causes of  Guillain-Barré Syndrome?

There is no known cause of Guillain-Barré syndrome, However, it is neither contiguous nor inherited. The autoimmune disorder is known to begin days or weeks after the patient suffers from respiratory or gastrointestinal viral infection. In some cases, surgeries also lead to the condition. As per the National Institute of Neurological Disorders and Stroke of the US, in rare cases vaccination may also increase the risk of the disease.

How is Guillain-Barré Syndrome Treated?

There is no known cure for Guillain-Barré syndrome. However, certain treatments can help reduce the severity of the disorder as well as fasten up its recovery time. These include blood transfusion, plasma exchange and high-dose immunoglobulin therapy. The patient can also be put on supportive care including mechanical ventilation and incubation. Physical therapies is also recommended for the patients for improved muscle control. Occupational and vocational therapies are also helpful .

According to an article in mayoclinic.org, most people recover from the disorder and the mortality rate lies between 4 per cent to 7 per cent. However, the recovered patients may experience long term fatigue, weakness and numbness. The Guillain-Barré syndrome is also known as acute idiopathic polyneuritis, acute idiopathic polyradiculoneuritis and Landry's ascending paralysis.

(The above story first appeared on LatestLY on Jul 13, 2021 11:04 AM IST. For more news and updates on politics, world, sports, entertainment and lifestyle, log on to our website latestly.com).