What Is Stuttering? From Winston Churchill to Joe Biden, Famous People Who Overcame Stammering and Proved to the World That the Speech Disorder Doesn't Hinder Success

Stuttering is highly attached with stigma BUT there have also been many successful people who have experienced the speech disorder and have proved to the world that if there is a will there is a way. The U.S. president-elect Joe Biden has often spoken about his stutter, inspiring many people around the world. 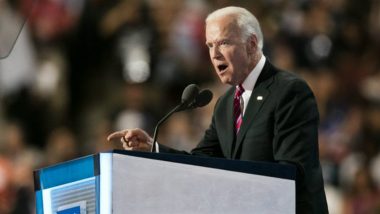 Stuttering is highly attached with stigma BUT there have also been many successful people who have experienced the speech disorder and have proved to the world that if there is a will there is a way. The U.S. president-elect Joe Biden has often spoken about his stutter, inspiring many people around the world. He has shared the challenges he had to face all his life especially during his speeches as a member of the U.S. Senate, as the vice-president, and even as the president-elect. Oldest Presidents of United States: As Joe Biden Gets Set to Be Sworn in, Here's a Look at 5 Former Presidents of US Who Were Above The Age of 64.

Not everyone understands the difficulties faced by the people with a stutter. Right from childhood to adulthood, verbal challenges have often been linked with mental health issues like anxiety and depression.  Biden has revealed in the past how overcoming a stutter was "one of the hardest things" he's done in life.

Stutter is a speech disorder that restrains people from speaking clearly. Usually, the affected person repeats the sounds of the words and gets stuck while speaking. In some cases, it can be corrected with the help of Speech Therapy. According to research, this condition is found in boys five times more than girls. Around 7 crore people around the world stammer. According to an estimate, by the year 2040, the number of stammers worldwide will increase to 90 million.

Recently, an emotional tale of Brayden Harrington's heart-to-heart with Joe Biden had melted people. The 13-year-old boy from New Hampshire, who had become famous after bonding with US President-elect Joe Biden over their experience with stuttering last year is proof that successful people have the potential to inspire others. According to a report by CNN, Harrington, whose video went viral over the summer after talking about his bond with Biden in a video at the Democratic National Convention, said Biden's inauguration will send a special message to kids -- including those grappling with stuttering.

He said, "It's a huge part of our life because there's a President being elected that has a speech issue." Speaking about the meeting with Biden, Harrington in a later video said, "He told me that we were members of the same club: We stutter. It was really amazing to hear that someone like me became vice president."

"I'm just a regular kid, and in a short amount of time, Joe Biden made me feel more confident about something that's bothered me my whole life...Joe Biden cared. Imagine what he could do for all of us," he added.

Biden previously told CNN that he didn't receive professional help for his stutter, but instead practised in the mirror for hours, reciting poetry written by Irish poets including William Butler Yeats. Moving into a career in politics, Biden said he started marking up his speeches, using slashes to show where he could take a moment to pause, noting that the method forces him not to rush. The same method is depicted in the Academy Award-winning movie "The King's Speech" about England's King George VI’s stutter.

(The above story first appeared on LatestLY on Jan 20, 2021 09:14 PM IST. For more news and updates on politics, world, sports, entertainment and lifestyle, log on to our website latestly.com).