World Schizophrenia Day is observed all over the world on May 24. The purpose of celebrating this day is to make people aware about this mental health condition. Schizophrenia is a serious mental illness that occurs mainly in childhood or adolescence. 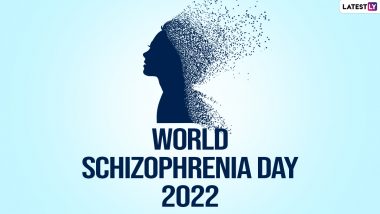 World Schizophrenia Day is observed all over the world on May 24. The purpose of celebrating this day is to make people aware of this mental health condition. Schizophrenia is a serious mental illness that occurs mainly in childhood or adolescence. Schizophrenic patients suffer from delusions, scary visions, and abnormal changes in the patient's thoughts, emotions and behaviour, which makes it difficult to lead a normal lie. It is also called psychopathy. A patient with schizophrenia may struggle to lead a normal life. About 1 percent of the world's population is a victim of schizophrenia, while the number of patients with this disease in India is around 4 million.

Schizophrenia is a serious mental health disorder that affects a person's behaviour and emotions.  According to statistics, three people out of every one thousand people fall prey to this disease.  According to psychiatrists, there are about 4 million people suffering from schizophrenia of various degrees in India. About 90 percent of patients who are denied treatment for schizophrenia are in developing countries like India. Schizophrenia is a chronic and severe mental disorder that affects a person's ability to think, feel, and behave clearly. However, there are many myths in India about this mental illness even today, which people believe to be true. Here are some of the more common myths and misconceptions about schizophrenia that you should also know of:

This is the most popular myth associated with schizophrenia, but according to experts, it is false. It has many symptoms, but no one symptom is similar to multiple personalities.

Once you are labelled with schizophrenia, it does not mean that you have to take drugs till the end of life. Psychiatrists decide on the basis of various factors for how long to give medicines. Many patients gradually get rid of the use of drugs and never see any symptoms or episodes of this disease again.

Doctors say that if this disease is not treated in time, then it can worsen the condition. The main objective of this day is to bring awareness about this mental disorder and to reduce the stigma.

(The above story first appeared on LatestLY on May 24, 2022 07:41 AM IST. For more news and updates on politics, world, sports, entertainment and lifestyle, log on to our website latestly.com).