Love Physics? Here’s a Collection of Interesting Books That Every Physics Enthusiast Must Read!

The epitome of human curiosity about and arriving at an understanding of our physical world, physics helps us understand what is matter. Here are a few suggestions of books that every Physics enthusiast should read to understand the basics and principles of the subject. 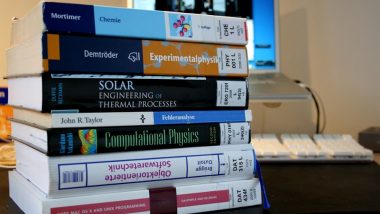 Microwave ovens to computers, refrigerators to mobile phones, air travel to advanced surgery -- can we imagine a world without these? But do most of us know what all these owe to Maxwell's laws of electromagnetism, Bernoulli's principle, thermodynamics, quantum mechanics, or in short, the majestic realms of classical and modern physics? The epitome of human curiosity about and arriving at an understanding of our physical world, physics helps us understand what is matter (in all its states), motion, the impact of forces on objects, and energy -- heat, light, sound, electricity, magnetism -- and what these can do for us. It thus underpins all the technology that makes our lives easier. Some of The Greatest English Books Ever Written, How Many Have You Read?

But, as noted in a previous installment, like other sciences, it remains an arcane area for most people, including those who studied it. Treated as just another subject to mug up and pass exams, its students are required to memorise the laws and processes of nature and regurgitate them to answer a set of trite and uninspiring questions/problems. All these stem equally from teachers racing to complete the syllabus, boring textbooks, the overriding objective to clear academic/competitive exams, and a lack of inclination to imbibe knowledge for its own sake. All these factors, however, are not peculiar to India. Take textbooks.

American physicist Jearl Walker, in the preface to his revised 10th edition of David Halliday and Robert Resnick's seminal "Fundamentals of Physics", wrote: "I had spent six years slugging my way through many dozens of physics textbooks that were carefully written with the best of pedagogical plans, but there was something missing. Physics is the most interesting subject in the world because it is about how the world works, and yet the textbooks had been thoroughly wrung of any connection with the real world. The fun was missing." 5 Inspirational Books That Can Change Your Life.

If you trawl across social media platforms about what Indian students think of this textbook -- used by generations from 1960 till now, and also boasting of a customised Indian version, just a handful speak about its utility in understanding the basic concepts, while the more common refrain will be how it stacks up against other books in preparing to crack various competitive examinations. Perhaps, if there were textbooks like Walker's own "The Flying Circus of Physics" (2011), which promises to show how physical phenomena, such as high-flying acrobatics and other stunts, and mind-bending illusions, are all a part of everyday life, or Paul Parsons' engagingly-titled "How to Destroy the Universe: And 34 Other Really Interesting Uses of Physics" (2012), they would better ignite minds.

Both the quality of textbooks and the staple rote learning, which lead to a lack of genuine understanding, are well described in "Surely You're Joking, Mr. Feynman!: Adventures of a Curious Character" (1985), the anecdotal autobiography of Nobel laureate Richard Feynman, deemed to be one of the top three physicists of the 20th century -- along with Albert Einstein and Stephen Hawking. There are a wide range of books that can be illuminating introductions to the intricacies of physics for both beginners and those who would like to brush up their knowledge. But before seeing some of them, let's see why the subject is important beyond education.

And who is better than someone who used his physics knowledge to make himself a household name -- Elon Musk, who holds that the "study of physics is a good preparation for innovation because it teaches how to reason from first principles" -- as cited in Sidney Perkowitz's "Physics: A Very Short Introduction" (2019). Part of the OUP's 'Very Short Introduction" series, this can be a good start. For the complexities of modern physics, especially its quantum element, Italian physicist Carlo Rovelli's "Seven Brief Lessons on Physics" (2014 in Italian; 2015) is unlikely to be surpassed. Less than 100 pages, and containing just a single equation -- that too, mentioned just in passing, it is meant "for those who know little or nothing about modern science".

Beginning with Einstein's general theory of relativity, which he terms "the most beautiful of theories", both for what it explains so simply and what a leap of thinking it represented, Rovelli goes on to deal with quantum mechanics, "where the most baffling aspects of modern physics lurk". The next two deal with our cosmos -- its architecture and then the particles that comprise it. Then comes quantum gravity and the attempts to synthesise all the major discoveries of the 20th century. Black holes follow before he signs off with us in the strange world physics describes.

Feynman, whose fame was due as much to his innovative and scintillating methods of teaching, offers an absorbing and virtually jargon-free introduction to some key areas of physics in "Six Easy Pieces" (1963), drawn from his famous California Institute of Technology (Caltech) lectures. This begins with atoms, describing all three common states of matter from the atomic framework, how atoms enable processes -- like salt dissolving in water, and then, how they act in chemical reactions. What follows is an invaluable insight into basic physics, divided into the pre-1920 period, and subsequently, quantum physics.

Feynman goes on to describe the relation of physics with other sciences, before returning to his subject with conservation of energy, and then, gravity, before ending with the subtleties of quantum behaviour. If you like Feynman's style, then you can also check his "Six Not-so-easy Pieces" (1987), which deals with more challenging and counter-intuitive issues stemming from Einstein's theory of relativity on space and time.

There is also "The Character of Physical Law" (1965), based on his guest lectures at Cornell University, where he covers, among others, the law of gravitation, the relation of mathematics and physics, the great conservation principles, symmetry, distinction of past and future, probability and uncertainty in the quantum mechanical view of nature, and more

And then, "Feynman's Tips on Physics: Reflections, Advice, Insights, Practice" (2013), where he takes up topics physics students often struggle with and offers his suggestions on dealing with them. Physicists Helen Czerski and James Kakalios bring physics right into our daily life with their "Storm in a Teacup: The Physics of Everyday Life" (2017) and "The Physics of Everyday Things: The Extraordinary Science Behind an Ordinary Day" (2017).

Czerski, who attributes her love for physics by telling us how the means to keep the Hubble Space Telescope fixed on its mission can be demonstrated by a simple trick to distinguish between a raw and boiled egg without removing its shell, also underscores its importance: "Everything you learn will come in useful somewhere else, and it's all one big adventure because you don't know where it will take you next." With chapters like "Popcorn and rockets: The gas laws", and 'Making waves: From water to WiFi", which shows the role of waves in various different manifestations and applications in our lives, Czerski, while maintaining a breezy, conversational style, packs in tons of information of easily assimilable.

Kakalios, on the other hand, uses the day of an average person to illustrate the role of physics in our daily life at home, in office, in commuting, work trips, business conferences, and even in a visit to a doctor for a minor ailment.

However, Kakalios does this spectacularly in "The Physics of Super Heroes" (2009, 2nd edition), an outcome of his university course where he uses various caped/web-slinging crusaders to explain a wide swathe of physics, including motion, conservation of energy, thermodynamics, quantum mechanics, materials science (via Iron Man), as well as why some of their extraordinary powers are not enough -- e.g. why Spider-Man couldn't save his girlfriend.

As he observes, tongue-in-cheek, scenarios involving projectile motion, weight on pulleys, oscillating masses on springs, seem so artificial that students lament when they will use all this in real life, but no one participating in his course using examples culled from superhero comic books ever raised the same question. "Apparently, they all have plans, post-graduation, that involve protecting the City from all threats while wearing spandex." There are many more -- say, Paul Sen's "Einstein's Fridge: The Science of Fire, Ice and the Universe" (2021) for thermodynamics. But while all these books may not help you pass exams or qualify in competitions, they will give you respect for physics, not to mention a pervasive insight -- and that will last.

(The above story first appeared on LatestLY on Apr 18, 2022 10:04 AM IST. For more news and updates on politics, world, sports, entertainment and lifestyle, log on to our website latestly.com).