It's Pride Month 2021 and so we thought of listing some of the most influential drag queens, who each and every day inspire many minds. Have a look at the stunning beauties here! 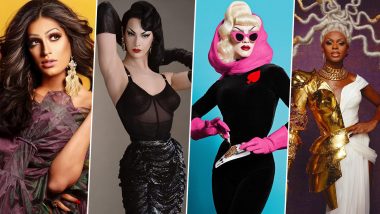 DRAG culture over the years has evolved to another level. Thanks to the iconic reality show, RuPaul's Drag Race, drag queens have gotten all the limelight they deserve. However, it’s an art form that’s over-the-top and not all may resonate with it. But love or hate it, the drag culture is going to get bigger in the coming time. For the unaware, drag has no boundaries and that’s the beauty about it. There’s makeup, shiny couture, wigs, and a hell lot of sass involved in making a drag queen. In a nutshell, drag queens are performers. And as we all know that June is celebrated as Pride Month across the globe, here are some of the drag queens you should follow on Instagram who are influential, inspiring, and stylish. Pride Month 2021: 5 Beautiful Same-Sex Marriages That Prove Love Is Love, Nothing More, Nothing Less (View Pics).

One of the most famous Indian drag queens, Sushant Divgikr has been serving looks for quite a long time. Her journey from Kitty Su to becoming this sensational drag diva is just amazing. She also is the first drag queen in India to feature on a singing reality show. More power!

Winner of RuPaul Drag Race season 7, Violet is known for her super tiny waist, aerial skills, vintage fashion and also being a fantastic performer. Have a look.

She was the first Korean-American contestant on RuPaul's Drag Race. Kim Chi’s style aesthetic is supremely different, colourful, and artistic which sets her apart from the rest. P.S: She is also known for her gorg makeup skills.

It’ll be a total shame if our list has no Sasha. Since her win on RuPaul's Drag Race, she has been ruling the internet by churning weirdly satisfying looks that are beyond imagination. Her lip-sync performance on So Emotional with rose petals revelation is one of the best TV performances ever on RDR. Pride Month 2021: Call Me by Your Name, Dance of the 41, Evening Shadows – 5 LGBTQ+ Films To Watch on Netflix India!

She’s not a regular queen and also happens to be the winner of RuPaul's Drag Race 6. Bianca is a seasoned gem and can literally serve you anything to everything. From looks, sewing her own gown to being a fab insult comic, she has got the CUNT (charisma, uniqueness, nerve, and talent).

She has a big personality and has a heart of gold. Miss Latrice Royole not only performs as a drag queen but also inspires. Her work speaks volumes and trust us the way she throws shade is the best in the business.

Last but not the list, here is the winner of RuPaul's Drag Season 13. The best part about her is that she is true to her roots and fabulously displays them. She hails from Arkansas and if you see her drag, she is definately the ebony enchantress.

That’s it, guys! These are the seven drag queens you should definitely follow on Instagram. The reason to click that follow button should not be because it’s pride month but it should be because their art is not everyone’s cup of tea and so ah-mazing. Stay tuned!

(The above story first appeared on LatestLY on Jun 18, 2021 05:46 PM IST. For more news and updates on politics, world, sports, entertainment and lifestyle, log on to our website latestly.com).