This Pride Month 2021, here's a list of the top five same-sex love stories which you can watch on Netflix India now. 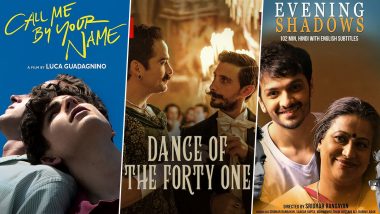 June is celebrated as Pride Month across the globe. It's the month where the homosexual fellas rejoice for just being themselves. Over the years, cinema as a whole has also changed and now we see a lot of LGBTQ+ representation. Earlier, movies on the queer subject were a rarity in the entertainment industry, but the time is changing. Now, their many worth-a-watch LGBTQ+ films that scream love is love. So, just in case, this Pride Month, you are craving for some same-sex love stories, then here are the top five flicks on Netflix India that you can watch ASAP. Pride Month 2021: 7 Popular Bollywood LGBTQ+ Characters From the Last Decade That Left an Indelible Impression!

If you are into slow love stories, then this film is a must-watch. The movie's plot is set up in 80s Italy, where a seventeen-year-old student comes to terms with his sexual orientation and also falls for an older man who is hired as his father's research assistant. It stars Timothée Chalamet and Armie Hammer as lead.

This is a French coming-of-age flick that highlights two moments from Jonas' life. One, when he was just a teen, and a secretive and closeted child, whereas another when he is all grown up and addicted to cigarettes. The film deals with subjects like addiction, internalised homophobia and more.

This one tells the story of Ned (Fionn O’Shea), a teenager who makes a great bond with Conor (Nicholas Galitzine) at a boarding school. While the former is into playing instruments, the latter is a star rugby player. However, there comes a time when the authorities test their friendship. The film has received many universal acclaims. Pride Month 2021: Taylor Swift Wishes Fans With an Adorable Post, Singer Signs the #summerofequality Petition With GLAAD.

An Indian LGBTQ+ film directed by Sridhar Rangayan, this one tells a story of a conservative tradition-bound Hindu family whose son comes out as gay. A brilliant work that will leave you with many mixed emotions. It has won 24 international awards with Mona Ambegaonkar as the star of the film.

Based in the late 19th century (when being homosexual was a sin), a gay man (Ignacio de la Torre) gets married to the daughter of the president of Mexico for political favours. But his life turns upside down when he lives a dual life and falls for a man. The tale at the end takes a depressing turn.

That's it, guys! These are our favourite LGBTQ+ films that are currently streaming on Netflix India. Each of the movies has a different flavour and promotes a story that needs to be heard. So, we would recommend, this pride month tune into these same-sex tales that are worth your time.

(The above story first appeared on LatestLY on Jun 07, 2021 09:18 PM IST. For more news and updates on politics, world, sports, entertainment and lifestyle, log on to our website latestly.com).