The fangs of the severed head bit him. The effect was so strong that he would have died if not received treatment immediately. 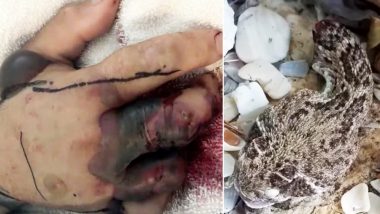 The hand of the man who was bitten by the head of the rattlesnake (Photo credits: YouTube screenshot)

A man in Texas had a near-death experience when he tried to deal with a rattlesnake in his garden. Milo Sutcliffe and his wife Jennifer were working around in their garden when she spotted a 4ft slithering snake in the yard. Milo used his shovel to get rid of it. He tried separating the snake's head from the body using the shovel as his weapon. The decapitated reptile lay there and once Sutcliffe tried to pick up the head in his hand to toss it away in the garbage, the fangs of the severed head bit him. The effect was so strong that he would have died if not received treatment immediately.

Mr. Sutcliffe started suffering from seizures, loss of vision and internal bleeding because the snake's venom was very powerful and it had coursed through the bloodstream as per the reports. His wife, Jennifer tried her best to take him to a hospital but his condition was worsening. He had to be airlifted to the hospital in a helicopter. The treatment given to him was also very intense. “A normal person who is going to get bit is going to get two to four doses of anti-venom,” the wife said. “He had to have 26 doses.” The doctors even said that he might not survive. The amount of anti-venom CroFab in his body was not enough. 20-Year-Old Survives a Shark, Bear & Rattlesnake Bite, in Just Less Than Three Years: View Pics.

Watch video of the rattlesnake severed head which bit the man:

Mr. Sutcliffe's hand turned dark purple with all the bruise was extremely swollen. It has been a week since the incident took place but he is still very much suffering from kidney problems. His condition is, however, now much stable than before. A snake bite can affect a person even hours later, even though the head may be separated from the body. In many cases, it has been seen that decapitated snakes turn to bite themselves. Losing its head does ensure its death but some reflexes are still active. James Murphy, head of the Reptile Discovery Center was once quoted to National Geographic, "snakes have the capability of causing biting and injecting venom even after the head has been severed, even though it is dead." So it is best adviced to call an expert rather than attempt to kill a snake on spotting one.

(The above story first appeared on LatestLY on Jun 07, 2018 06:49 PM IST. For more news and updates on politics, world, sports, entertainment and lifestyle, log on to our website latestly.com).