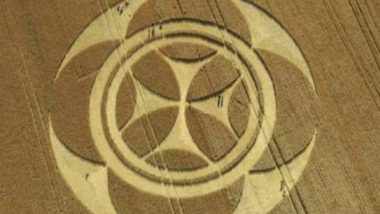 Crop circle, or crop formation has always incited alien theories and paranormal activities among people. Some relate religious references to the activities while others believe it to be simply mysterious. The latest such crop formation has appeared in a wheat field in France. Pictures of the giant templar crop circle in Northern France has gone viral on social media platforms. The owner of the farmland, Gerard Benoit, noticed the pattern while driving his tractor earlier this month. The design quite precisely done has been described as a 'Templar Cross'. The Benoit family even shared some pictures of the circles on social media, but they had to take it down as hundreds of people started visiting their farm since then. As it incident has once again stirred up talks about crop formation, we take a look similar incidents in the past, when overnight crop formations shocked people. Four Mysterious Circular Objects Detected in Space by Astronomers And They Do Not Know What It Is!

Talking about the recent incident in France, Nicolas Benoit, Gerard Benoit's son, told Euro Weekly News, "I thought someone had damaged my wheat overnight, but then I realised it was forming a pattern. We've never seen a crop circle before. We see it in movies. Its vandalism, but we said to ourselves, 'It's good for once. We saw a lot of people come to the field and we discovered that there were religious beliefs around it. People are crazy. They come to pray. We are not a museum. The crop circles are beautiful, but for someone else." UFO or Shooting Stars? Mysterious Burning Object Spotted Over UK Skies Leaving a Trail of Smoke for 20 Minutes (See Pictures)

What is Crop Circle or Crop Formation?

The phenomenon of patterns created by flattening a large area of the crop was given a term by Colin Andrews in the 1980s. Over the years, people said that the phenomenon was connected to the activities of extraterrestrials. However, there are others who believe that they are just cooked up stories. The phenomenon of crop circles received mainstream coverage after M. Night Shyamalan’s 2002 thriller ‘Signs’, that showed a family living in the US suburbs waking up to find huge patterns on their cornfield.

Among many found in the 21st century, the one that attracted a lot of attention was the one in 2014. A crop circle drew attention to the wheat field near Weilheim in Germany. Thousands of people had trekked to Bavarian farmer's field to check out a mysterious set of crop circles.

However, the story of two men who spent time making these crop circles had shared about their experience in the 1980s busting the mystery theory of alien activity. Doug Bower and his co-conspirator Dave Chorley first created a representation of a 'flying saucer nest' in a wheat field in Wiltshire, England, in 1976. However, these circles have been appearing even into the 17th century which obviously wasn't photographed. In southern England, where these formations are common, it is believed that circle-makers are behind this activity. They often focus on making these intricate designs on canola, barley and wheat. Some also say that crop circles are publicity stunts to attract tourists to a particular region and increase the local revenue of the region.

Know More About the It From Crop Circle Theorist Andy Thomas:

According to the first scientific explanation about these formations in 1686 by the British scientist Robert Plot, it was referred to as terms of airflows from the sky. Centuries later, meteorologist and physicist Terence Meaden suggested they could be whirlwinds that moved to an electro-magneto-hydrodynamic "plasma vortex" resulting in these patterns. However, according to some experts, the worrying part of this is the fact that these damaged crops are still harvested and enter our food chain.

(The above story first appeared on LatestLY on Jul 14, 2020 11:21 AM IST. For more news and updates on politics, world, sports, entertainment and lifestyle, log on to our website latestly.com).