Woah! Four Mysterious Circular Objects Detected in Space by Astronomers And They Do Not Know What It Is! 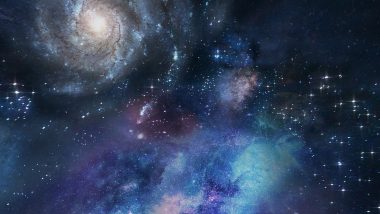 Studying the universe and many objects in it is interesting, with so much to discover about the planets, stars, meteoroids and more. But a sighting of strange objects always raises eyebrows, if there is an undetected presence of somebody else out there. A team of astronomers have detected not one but four strange objects in space. All of them are circular in shape, and three are particularly bright around the edges. The findings have been published in a paper and submitted to Nature Astronomy. The peer review of this finding is yet to be done. The team is calling them "Odd Radio Circles" (ORC). Mysterious Radio Signals Probably Coming 'From Aliens' Recorded by Canadian Astronomers.

These objects look like ring-shaped islands and astronomers have yet to ascertain how far into space they are. These mysterious things were detected by Ray Norris, Professor of Applied Data Science in Astrophysics for Western Sydney. They used the Australian Square Kilometre Array Pathfinder (ASKAP) telescope. The discovery was made during a project undertaken to take a census of the radio sources in the sky, when these four objects, never seen before, were noticed. Scientists Hunt for Secrets in 12-Billion-Year-Old Signal From Universe’s Dark Age of the Cosmos, the Starless Era (Watch Videos).

Two of these objects harbour a galaxy in the middle, and although they appear closer in the sky, their physical distance from each other is also unknown. They could be linked to other galaxies, as they are away from Milky Way's galactic plane. The team has ruled out several possibilities of what they could be including supernovas, star-forming galaxies, planetary nebulas. They mention it could be some leftover shockwaves from an extragalactic event or possibly activity from a radio galaxy. All the four are visible only in radio wavelengths. There could be more than one cause for these ORCs and the mystery is getting intriguing for the scientists who will study it in further detail. But they are convinced that this is a new phenomenon or new detection of a known phenomenon.

(The above story first appeared on LatestLY on Jul 10, 2020 12:48 PM IST. For more news and updates on politics, world, sports, entertainment and lifestyle, log on to our website latestly.com).