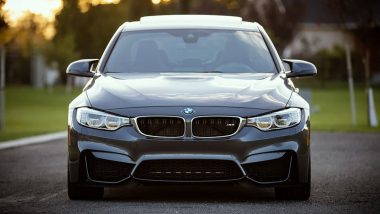 The coronavirus pandemic has got upon us. Every year you look, every second post you scroll, and all the next news, everything somewhere ends with the updates of novel coronavirus and how it is spreading rapidly. But Adelaide Airport, in the capital city of South Australia, was left bewildered after spotting a BMW car being abandoned there. The reason it is causing so many questions is because of the number plate of the car that reads, ‘COVID 19,’ and airport authorities reported that the car has been parked there since February, or even earlier, before the pandemic hit the world. The car’s plate number raises speculations as to who it belongs to and why it had not been picked up yet. 2020 BMW X6 SUV-Coupe Launched in India at Rs 95 Lakh; Prices, Features, Specifications & Other Details.

The grey BMW sedan was spotted by an airport staff, who said that it had been parked there for months now. The photo of the car was supplied to ABC, who then broke the news. The airport staff, identified in the report as Steven Spry said that the vehicle was left before Australia’s lockdown began. Spry said as far as his colleagues could recall, the car had been there since ‘February or even earlier,’ and was definitely there since mid-March. During this time, most of the airport staffs went on four weeks of forced leave. He added, that the car had a cover over it, which was blown off by the wind, during April, displaying the number plate that caused more speculations.

“We seem to think it might be a long-haul pilot who has gone overseas and can't get back,” Spry was quoted saying in ABC report. “It’s a high-end vehicle so it's going to have to be someone on a fair dollar to get a vehicle like that, but you'd think a family member would have gone to get it,” he added. The owner of this car is not known as of yet. The report, citing State Government’s EzyReg website noted that the BMW in question is registered until September 26, 2020, and there are no cars interstate with the registration ‘COVID 19.’

(The above story first appeared on LatestLY on Jul 14, 2020 07:08 PM IST. For more news and updates on politics, world, sports, entertainment and lifestyle, log on to our website latestly.com).