BTS Permission to Dance on Stage Concert Date, Time & Venue – Everything You Need to Know About K-Pop Band’s Next Gig

The concert will take place at the Seoul Olympic Stadium in-person in front of a live audience and will be streamed online. 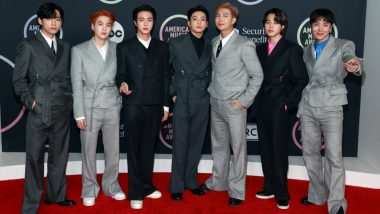 K-Pop superband BTS are returning with BTS Permission To Dance On Stage - Seoul' on March 10, 12 and 13. The concert will take place at the Seoul Olympic Stadium in-person in front of a live audience and will be streamed online. The concert marks the band's first gig with a live audience in Korea in approximately two and half years since BTS World Tour 'Love Yourself: Speak Yourself' (The Final) held at the same venue in October 2019. After Jimin, BTS Member V Tests Positive for COVID-19 Despite Completing Two Rounds of Vaccinations.

The online live stream is available on March 10 and 13. The concert on March 12 will be broadcast in cinemas worldwide through a ‘Live Viewing' event. BTS, or Bangtan Sonyeondan, are a septet comprising Jin, Suga, J-Hope, RM, Jimin, V, and Jungkook. The band is also known as the Bangtan Boys. BTS x Srivalli Viral Mashup Video: Jimin Dancing Like Allu Arjun’s Trending Hook Step From The Movie Pushpa is GOLD!

They have given blockbuster songs such as 'Butter', 'Dynamite', 'Permission To Dance' and 'Idol' to name a few.

(The above story first appeared on LatestLY on Feb 16, 2022 01:51 PM IST. For more news and updates on politics, world, sports, entertainment and lifestyle, log on to our website latestly.com).