While the gender reveal parties are becoming popular widely, a couple in Toronto had a different plan. Going against the set rules of society, a couple sprayed some green colours. 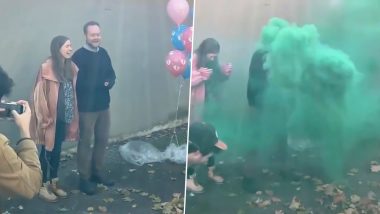 Gender reveal parties have become quite a thing in the West. Friends, families, parents and closed ones get together to know the gender of the child. The colour blue represents boys while pink is for girls. While the gender reveal parties are becoming popular widely, a couple in Toronto had a different plan. Going against the set rules of society, they sprayed some green colours. Well, you don't have to think hard to know the gender of the child, because, they are not planning to tell you! Woman Farts Out Gender Reveal Colour Blue In This NSFW Video That Will Make You Go: ‘Now That’s Classy!’

It also aims at making people aware of why we need to stop judging people on the basis of their gender. The video begins with the couple standing in front of a group of people excitedly waiting to know if it is a boy or a girl. But there comes a green smoke making everyone choke. The father-to-be also begins coughing leaving the mother-to-be shocked. Gender Reveal Stunt Goes Wrong! Plane With 1324 Litres of Pink Water Crashes in Texas (Watch Video)

The video ends with a caption which reads, 'Gender is a construct'. The video was originally on TikTok by Twitter user Nikki Mccann Ramírez with the caption, 'Ok they win'. She also explained the unique concept of the video in the comments.

Some of yall seem confused pic.twitter.com/4EjweNYsV6

The funny video is a dig at the society's obsession with knowing the child's gender before the baby is born. The video went viral garnering mixed reactions from people. While some created jokes and memes around it, others supported the couple's choice.

(The above story first appeared on LatestLY on Nov 27, 2019 03:02 PM IST. For more news and updates on politics, world, sports, entertainment and lifestyle, log on to our website latestly.com).