A screengrab of tweet claiming that the BJP has forged an alliance with Asaduddin Owaisi's AIMIM for the West Bengal assembly elections 2021 is going viral on social media. 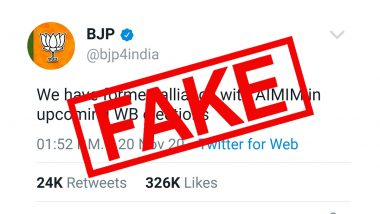 Kolkata, November 24: A screenshot of tweet claiming that the Bharatiya Janata Party (BJP) has forged an alliance with Asaduddin Owaisi's All India Majlis-e-Ittehadul Muslimeen (AIMIM) for the West Bengal assembly elections 2021 is going viral on social media. The tweet has been attributed to the verified Twitter account of the BJP. The fact is no such alliance between the BJP and AIMIM is forged. West Bengal Assembly Elections 2021: Setback For Asaduddin Owaisi, AIMIM Convenor Sheikh Anwar Hussain Pasha Joins TMC.

"We have formed alliance with AIMIM in upcoming WB elections (sic)," reads the fake tweet attributed to the BJP. The screenshot is widely circulated on Twitter, Facebook and WhatsApp. The tweet is posted by the handle "@bjp4india", whereas the originals Twitter handle of BJP is "@BJP4India". Evidently, the BJP has neither formed an alliance with AIMIM, nor it made any such announcement on Twitter. Coronavirus Vaccine Launched in India? PIB Fact Check Calls Viral WhatsApp Message Fake.

While there is no buzz about a tie-up between the BJP and AIMIM, reports said Asaduddin Owaisi reached out to West Bengal Chief Minister and Trinamool Congress (TMC) supremo, Mamata Banerjee, for a pre-poll alliance for the upcoming assembly elections.

Owaisi had said on Sunday that the party is deliberating with the West Bengal unit over contesting the assembly elections, likely in April-May, and will take a decision after getting feedback from them.

(The above story first appeared on LatestLY on Nov 24, 2020 07:48 PM IST. For more news and updates on politics, world, sports, entertainment and lifestyle, log on to our website latestly.com).