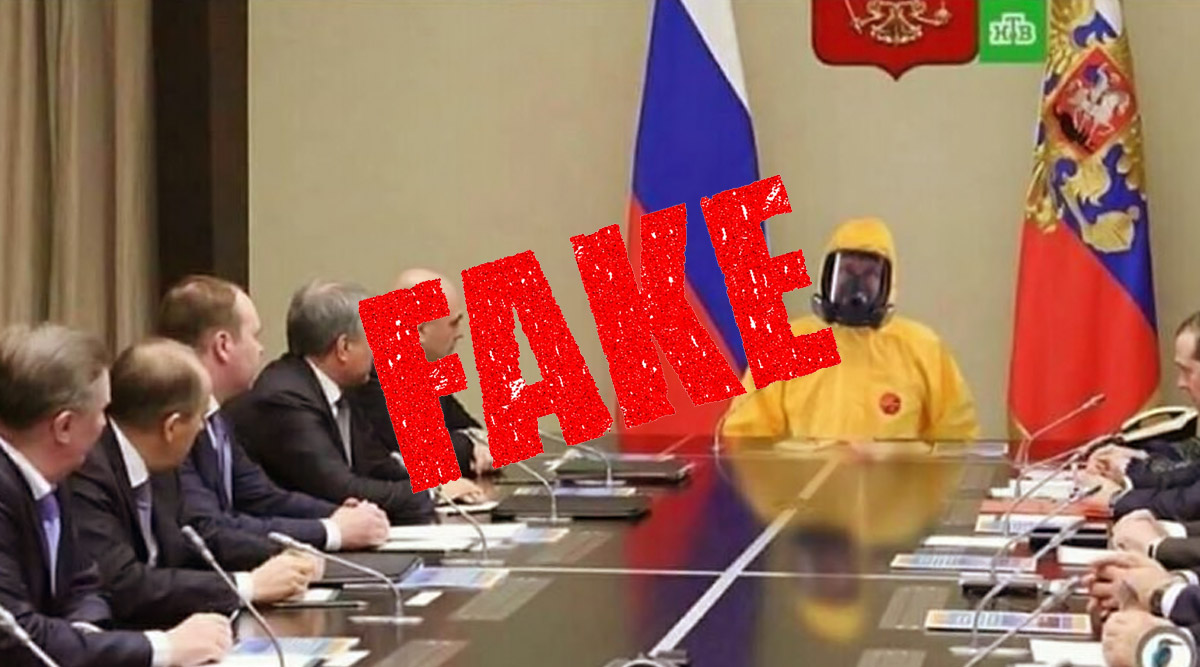 Moscow, March 28: Russian President Vladimir Putin's image in full-body yellow hazmat suit in a purported meeting with officials went viral on social media. Netizens took a jibe at the Russian premier for taking exaggerated precautionary measures amid the coronavirus outbreak. Did Putin really wear the preventive gear while all other officials were dressed in regulars? Here's a fact check. News of Russian President Vladimir Putin Released 800 Lions and Tigers in Streets Shared on Social Media is FAKE.

By verifying the information released through verified news agencies and Russian government's portal, it was found that Putin did not wear the gear with any such meeting with the officials. A back-search of the viral image revealed that it dates back to January 20, 2020 -- when coronavirus had not affected any person in Russia. Further, the image of Putin was edited using a photo-editing tool to replace it with him in the hazmat suit. See the unedited photo here.

I Have Trust issues but Putin is on Another Level..!!🤣🤣#CoronaUpdate pic.twitter.com/WV4XI6iuvO

Russians: In Putin we trust!!

The second image shared by Twitter users was also found to be fake. Back-searching the same on Google led to a semi-official Russian portal which showed the head of state entering into the official premises, while two guards pay salutation to him.

The full-body yellow gear, however, was donned by Putin while visiting a medical facility where coronavirus patients are being treated. Russian media outlets and news agencies had tweeted the video of him entering the hospital after wearing the necessitated preventive gear.

Russia has so far reported around 1,000 coronavirus cases along with three deaths. A spree of fake news has hit the internet amid the pandemic, with rumours mongers recently sharing malicious to claim that Putin has released lions in the streets of Moscow to enforce the shutdown. The claim was also found to be fake.

Fake news. The image is of January 20, 2020 and is maliciously edited.