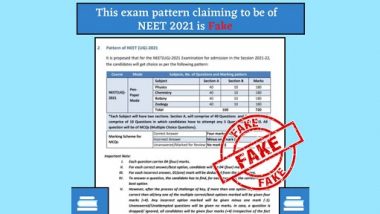 Dismissing the fake claims, a fact check by the Press Information Bureau (PIB) has found out that the exam paper pattern is fake. It added saying that post going viral is misleading and baseless and is not released by NTA. "This exam pattern is 'Fake' and not released by NTA". The fact check also alerted aspirants not to fall a prey to such fake information and visit the NTA's official website: https://nta.ac.in.  Clerks, Guards, Peons Appointed by Department of Justice For Government Jobs Through Direct Recruitment? PIB Fact Check Debunks Fake News, Here's the Truth.

Several posts claiming that @DG_NTA has released the exam pattern of #NEET2021 are doing the rounds on social media#PIBFactCheck: This exam pattern is #Fake & not released by NTA.

Several such fake information is being shared on social media platforms, especially after the outbreak of coronavirus pandemic in India. The government has time and again urged people to be careful about such news and do not believe any other source of information apart from the official notification. The officials have also asked the aspirants to visit the official websites for any update or announcements.

Several posts claiming that NTA has released the exam pattern of #NEET2021 are doing the rounds on social media.

This exam pattern is Fake & not released by NTA.

(The above story first appeared on LatestLY on Mar 22, 2021 08:03 PM IST. For more news and updates on politics, world, sports, entertainment and lifestyle, log on to our website latestly.com).