You might have received a message on WhatsApp which says you can win a Tata Safari by filling a questionnaire. Know the truth behind it here. 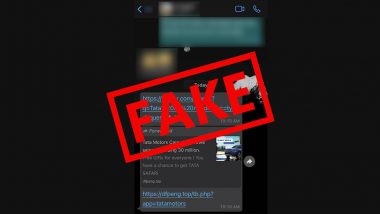 Mumbai, June 8: You might have received a message on WhatsApp which says you can win a Tata Safari by filling a questionnaire. The WhatsApp message, which also contains a link, claims the "offer" is made because automobile major Tata Motors Cars reported sale exceeding 30 million. The message is going viral on WhatsApp as well as on Twitter, and people are filling the questionnaire in hope to win Tata Safari. But, the fact is this message is fake. Ratan Tata Again Calls Out Fake News as Rumour Mongers Quote Him as Saying That '2020 Is Year to Survive, Not to Make Profit'.

"Tata Motors Cars, Celebrates sales exceeding 30 million! Through the questionnaire, you will have a chance to get a TATA SAFARI (sic)," read the viral message. While some filled the questionnaire, others went on Twitter and asked Tata Motors if the claimed offer is made by the company. Tata Motors Cars has now issued a statement stating that the offer or scheme is circulated "with malicious intent of enabling data pilferage and phishing of anyone who opens the links". Tata and Tesla to Team Up? Tata Motors Denies Any Partnership After 'Tere Mere Pyaar Ke Charche' Tweet to Welcome Elon Musk's Company Sparks Rumours on Their Alliance.

"Please note that Tata Motors has not announced any such contest and categorically denies any such association with such schemes. Moreover, we strongly suggest that such fraudulent messages should not spread further on social media and be deleted immediately," read the statement issued by Tata Motors. The company also asked people to refrain from clicking on suspicious links and messages.

Here it may be noted that Tata Motors' domestic total sales for May rose to 24,552 vehicles sold, compared to an off-take of 4,418 units during the corresponding month of 2020. The company had in April reported that its global wholesales in Q4FY21, including that of Jaguar Land Rover rose by 43 per cent on a YoY basis to 330,125 units.

(The above story first appeared on LatestLY on Jun 08, 2021 10:57 AM IST. For more news and updates on politics, world, sports, entertainment and lifestyle, log on to our website latestly.com).