Video of Newly Renovated Kashi Vishwanath Temple in Varanasi With Hundreds of Shivlings Goes Viral on Social Media, Here’s the Truth Behind the Fake Clip

The fake video of the temple, which is doing rounds on Facebook, Twitter, and WhatsApp has been uploaded on YouTube and shows hundreds of Shivlings inside the temple. The fake video also shows crystal replicas of the 12 Jyotirlingas and the temple’s stunning interiors. 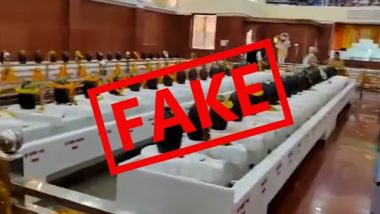 Lucknow, July 7: A fake video of the Kashi Vishwanath Temple in Uttar Pradesh's Varanasi is doing rounds on social media platforms claiming that it is the newly renovated temple with stunning interiors. The fake video of the temple, which is doing rounds on Facebook, Twitter, and WhatsApp has been uploaded on YouTube and shows hundreds of Shivlings inside the temple with some really artistic interiors.

The fake video was shared on Facebook on a page named ‘World Of Divine’. The video garnered more than 12,000 views for the video at the time of writing. After the video went viral, a fact check was conducted by altnews.in to find the truth behind the viral video. It was revealed that the images used in the viral clip are not that of Kashi Vishwanath but of Shri Mani temple in Varanasi. Click here to check the Fake Video of Kashi Vishwanath Temple.

The Shri Mani Mandir in Varanasi’s Durgakund is run by a religious organisation called Shri Dharm Sangh. The website of the Mani Temple has multiple pictures and videos of the temple that show the same structure and lingas as seen in the viral video. The same video can also be found on the temple’s website.

A close look at some media reports also suggested the Shri Mani Temple was inaugurated in February 2020. Several users on social media, who had visited the Mani Mandir, knew that the video was a fake one misleading people that it was the Kashi Vishwanath temple. Netizens also wrote that the video shows Mani Mandir and not otherwise.

A fake video of the newly renovated Kashi Vishwanath temple in Varanasi is doing the rounds on social media showing hundreds of Shivlings inside the temple.

The viral clip is not the newly renovated Kashi Vishwanath temple in Varanasi. The place of worship has been identified as Mani Mandir in Varanasi’s Durgakund.

(The above story first appeared on LatestLY on Jul 07, 2021 03:22 PM IST. For more news and updates on politics, world, sports, entertainment and lifestyle, log on to our website latestly.com).