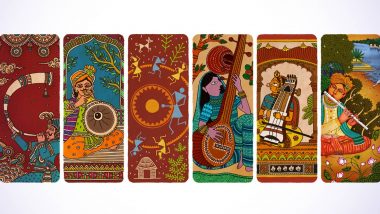 India celebrates Independence on August 15 every year marking the freedom the country received from the British regime. After 200 years of colonial rule, the country has gained power back in its hands. Indians observe the day with grand celebrations every year. While due to COVID-19 pandemic, 74th Independence Day celebrations have been curtailed and minimal festivities will be held across the country. The Prime Minister hoists the national flag at Red Fort in Delhi following the ceremonial act by first Prime Minister of India Pandit Jawaharlal Nehru on August 15, 1947. Indians wish each other saying 'Happy Independence Day' or Swatantrata Diwas ki Hardik Shubhkamnaye in Hindi. Independence Day 2020 Quotes & Thoughts: From Albert Einstein to Max Muller, Here's What Eminent Personalities Have Said About India.

Indians across states hoist the national flag, salute it and sing the national anthem. People dress in the colours of tricolour and organise various cultural and traditional events. At schools, colleges, government offices and private organisations, events remembering the sacrifices of the freedom fighters and the progress of the country are held. People talk about the scientific and technological advancements India has made after receiving independence. Various events showcasing the country's varied cultural significance is also held. Children dress up as freedom fighters and deliver speeches on Independent India. People play patriotic songs showcasing the spirit of the day. We wish all Indians a Happy Independence Day 2020!

(The above story first appeared on LatestLY on Aug 15, 2020 08:29 AM IST. For more news and updates on politics, world, sports, entertainment and lifestyle, log on to our website latestly.com).