Indiana Gay Teen Punches Homophobic Bully! Watch Viral Video of High School Boy As He Fights Back Against His Tormentor

Jordan Steffy, a junior at Indiana’s LaPorte High School, reported that the harasser had made an anti-gay post on the photo-sharing app with a picture of Jordan and hated remarks. This triggered the videotaped incident where Jorden can be seen confronting and punching the guy who mocked him for his sexuality. 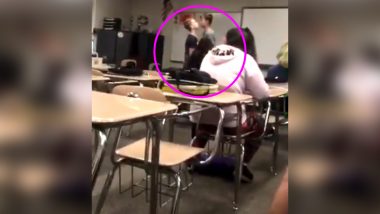 An Indiana high school student has created an uproar on social media after a video of him went viral online. The clip shows the teenager who is a gay standing up against his homophobic classmate who reportedly bullied him on Snapchat. Identified as Jordan Steffy, a junior at Indiana’s LaPorte High School, reported that the harasser had made an anti-gay post on the photo-sharing app with a picture of Jordan and hated remarks. This triggered the videotaped incident where Jorden can be seen confronting and punching the guy who mocked him for his sexuality. With his clip going viral on Twitter, people online are applauding the high school teenager for boldly coming out in front of his classmates. University of Tennessee Aspirant Was Bullied for His UT DIY T-shirt, Now His Drawing Is an Official School Logo.

After the clip went viral, Steffy was interviewed by Insider, where he explained why he had to take an extreme step. He said that he been enduring homophobic bullying at school ever since seventh grade, when he first came out. The teenager further noted that many a time he has complained about getting bullied to the school officials but ends up getting in trouble. It was the final straw for Steffy! The same student had been calling him f**got almost every day. He was forced to take matters into his own hands, after teachers refused to help him and the harasser took to Snapchat to shame him. School Bullying Increases Chances of Mental Health Issues.

“He made an anti-gay post with a picture of me on it saying how he hated gays and a bunch of throwing up emojis all over it. I walked up to him and said ‘Why did you post this?’ He said ‘It was just a post.’ And I said ‘Well, it’s not just a post. It’s a post about me, saying how you dislike who I am, and I don’t appreciate that.’ He went on to say ‘Okay, but what are you going to do about it?’ I said ‘I’m not going to deal with this, this is the last time I’m called anything.’ And then he said ‘What are you going to do about it, faggot?’ And that’s when I was like ‘No, I’m not doing this,” he was quoted saying in the media outlet.

This is the fight 😶 pic.twitter.com/DAsehv9I4m

After the fight, Steffy reportedly was sent to the principal’s office and got suspended for a week. But we are all proud of him for standing up for himself. Steffy may not get the support that he should from his school administrators, but he has the rest of the internet. As his video went viral, he has received an outpouring of support, and it could be any better.

I'm sorry you had to go there, but I love that you stood your ground. Keep being you! Xoxo

We All Are Proud of You!

You did the right thing pic.twitter.com/xlAENb5xOd

Jordan I'm a retired teacher and judge of the juvenile court. I don't hold with violence but I do hold with self-defense and I think you did a very very good thing. Maybe this youngster will think twice before trying to build himself up by being an idiot. Good for you!

Bullying at schools has been very common. And the worst part of it all is that teachers and parents at times call it a part of growing up, which is not the case, at all! Any school must owe up to such matters and stringently address bullying so that no student is affected.

(The above story first appeared on LatestLY on Nov 12, 2019 12:11 PM IST. For more news and updates on politics, world, sports, entertainment and lifestyle, log on to our website latestly.com).