University of Tennessee Aspirant Was Bullied for His UT DIY T-shirt, Now His Drawing Is an Official School Logo

Drawn on a piece of paper, the UT logo was pinned to an orange T-shirt that he was wearing. Unfortunately, the UT aspirant became a victim of bullying. Snyder’s post got social media attention, and as it went crazy viral, the boy’s DIY is now an official UT logo. 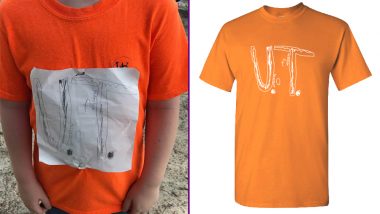 A fourth-grade student from Flordia’s Altamonte Elementary School wanted to participate at “College Colors Day.” Students in such events are asked to dress and represent their favourite college or university. But the kid did not own any official attire for the university. So, he decided to go for a DIY and make his own UT logo. His teacher, Laura Snyder, through a Facebook post, described the student’s effort. Drawn on a piece of paper, the UT logo was pinned to an orange T-shirt that he was wearing. Unfortunately, the UT aspirant became a victim of bullying. Snyder’s post got social media attention, and as it went crazy viral, the boy’s DIY is now an official UT logo. Bullied Primary School Student Sends 25 Classmates to Hospital Spiking Their Water With GLUE As Revenge in Turkey.

“Some girls at the lunch table next to his (who didn't even participate in college colors day) had made fun of his sign that he had attached to his shirt. He was DEVASTATED,” Snyder wrote on Facebook. In the post, she asked if anyone could get the boy something special. The post got UT’s attention, who sent a personalised care package to the boy and his classmates. Hats, bags, and so many school supplies arrived at Snyder’s classroom.

And the university did not stop here. They turned the boy’s original logo design into an official school t-shirt. It so could not get any better! A portion of the earnings through the orange tee will be donated to STOMP Out Bullying. It is an anti-bullying organisation.

Share in a Florida elementary student's Volunteer pride by wearing his design on your shirt too! Pre-order today for a late September expected delivery. A portion of proceeds from every shirt sold will be donated to @STOMPOutBullyng .https://t.co/NdnTtYREFL pic.twitter.com/OeTZvgC09Y

It is genuinely a greater respond that any aspirant could get from their favourite universities. The campus store even reported that they received overwhelming respond for the t-shirt. The demand caused their servers to crash temporarily. The UT aspirant’s identity has not been revealed for his betterment. However, a note from his mother was shared by teacher Snyder on Facebook, who extremely overwhelmed to the University’s response.

(The above story first appeared on LatestLY on Sep 09, 2019 09:14 AM IST. For more news and updates on politics, world, sports, entertainment and lifestyle, log on to our website latestly.com).