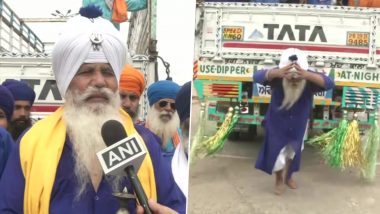 A 75-year-old Nihang Sikh, Satnam Singh in Ludhiana pulled a 10-tonne truck using a rope tied to his shoulders trying to inspire youth to stop using drugs. The septuagenarian pulled the truck after two months of practice. He initially started to pull 110 kg of weight. The armed Sikh warrior was quoted as saying, "When with just two months of practice, I can pull this truck and lift heavy weights with my teeth, then the youth here can do everything. For that, they will have to stay away from drugs." Singh added, "I am 75 years old and this truck which I have pulled weighs 10 tonnes. I have been practising for two months." World’s Strongest Man Hafthor Bjornsson’s Workout and Diet Plan Will Make You Tough as the Mountain.

Nihang is an order of Sikh warriors, characterised by blue robes, antiquated arms such as swords and spears, and decorated turbans surmounted by steel quoits. Singh reportedly said that his inspiration to pull the truck to motivate the youth to leave drugs came after watching a viral video of youth getting intoxicated. He was upset about seeing it and wanted to do something that will help inculcate better habits in them. So, Singh decided to be an example of how one can gain strength and be fit without drugs. Singh started practising by pulling 110 kg with his teeth. And then tried by pulling his car with teeth. After successfully attempting it all now he now tied a rope to the truck and his shoulders and pulled it.

Punjab: A 75-year-old man, Nihang Singh, pulled a truck in a bid to motivate youths to shun drug addiction, in Ludhiana yesterday. He said, "My message to youths is that if I can pull a truck, they can do anything. Please stay away from drugs and do not ruin your life." pic.twitter.com/6RYdyA250M

Talking about his inspiration for the attempt, he said, "I watched a video of a youth who was taking drugs and I thought our youth are being destroyed by them. So we should do something that will inspire them to take up the task that can benefit them. So I came up with this idea and started my practice. Initially, I started to pull 110 kg of weight and then vehicles with my teeth. Now I have pulled a truck by tying a rope to my shoulders to show youth that if I can do this at this age then youngsters too can, and for this, they need to quit drugs."

There has been increasing cases of drug abuses in Punjab among the youth in the recent past. Recently, close to 121 people died after consuming illicit liquor in three districts of Punjab. The movie Bollywood movie Udta starring Shahid Kapoor is based on the drug crisis in Punjab and the issues surrounding it.

(The above story first appeared on LatestLY on Aug 14, 2020 02:37 PM IST. For more news and updates on politics, world, sports, entertainment and lifestyle, log on to our website latestly.com).