The 30 years old Hafthor Bjornsson began his career as a basketball player. He stands 6 feet 9 inches tall. He was born in the capital city of Reykjavik in Iceland. Bjornsson started participating in World's Strongest Man event from the year 2011, in his first attempt he ended up on the sixth position. Since then, he finished in first three positions and came runner-up in the year 2014, 2016 and 2017. 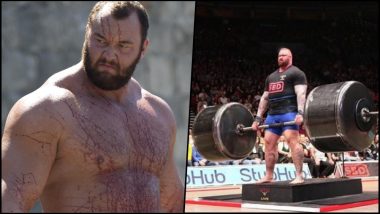 The 30-year-old Hafthor Bjornsson began his career as a basketball player. Born in the capital city of Reykjavik in Iceland, the six-foot-nine Bjornsson started participating in World's Strongest Man from the year 2011. In his first attempt, he ended up on the sixth position. Since then, steadily worked towards the top in the years 2014, 2016 and 2017 when he ended up as a runner up.

Hafthor Bjornsson performs heavy compound movements and his training mostly revolve around strength development. In order to lift heavy, it is necessary to have a strong core, lower body and back muscles.

Hafthor practises deadlift exercises and bench presses where he concentrates on working on his muscles. Along with performing sets of an exercise with a specific amount of repetitions, he also goes for one rep max (ORM).

Bjornsson also performs overhead press and incline bench press in great numbers to make his anterior deltoid stronger. Bjornsson trains for stamina to; he visits the gym six times a week where he sometimes workout twice in a day with cardio and stretching in the morning.

Training for Iceland’s Strongest Man Challenge 10th of August. For those who would like to attend press the link in my bio to buy tickets! @kieliszkowskimateusz will also be competing, as a guest. 💪💪 @thorspowergym

In order to keep the body in an anabolic state and maintain strength stability Bjornsson ensures that he starts his day with a nutritious meal. The key to maintaining muscle mass is to keep your metabolic rate high and eat at an equal interval to avoid fat formation. Bjornsson eats regularly and ensures that he balances his macronutrients-protein, carbohydrates and fat properly.

Bjornsson's early morning meal includes six to eight egg whites and one full egg. Along with that, he eats one cup of oatmeal along with a bowl of fruit. His mid-morning diet includes granola bars and a protein shake.

His lunch includes lean beef or turkey or chicken along with a cup of oatmeal, brown rice and a bowl of raw/cooked vegetables. The Mountain's dinner also remains the same, however, in between that, he includes evening meals of egg whites, three cups of skimmed milk, protein shakes, whole grain bread and whole-grain pasta. Oatmeal is a part of all his meals and before sleeping, he drinks blended whey protein.

It's not easy to be The World's Strongest Man. And Hafthor's workout and diet are proof of it. He maintains his mountain of a physique by giving priority to strength and clean eating.

(The above story first appeared on LatestLY on Jul 17, 2019 02:20 PM IST. For more news and updates on politics, world, sports, entertainment and lifestyle, log on to our website latestly.com).