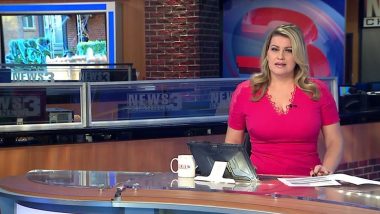 We claim to be open-minded people on one end and yet pass on our biased opinions and sexist comments on the other. With the wide presence of social media without any filter, a lot of opinion flows freely on the platform, often mounting to body shaming and sexism. While you thought trolls were only attacking people from the entertainment world, a recent incident proved that people don't see journalists and newscasters, differently. Nina Harrelson of WREG in Memphis took to social media to call out critics who share their unsolicited opinions about women’s bodies that are outright sexist. "You look mighty big on TV!" is what a "complete stranger just said" to Harrelson. She posted on social media that, "FYI - journalists are not models... And I can assure you, none of us wants to hear your opinions on our bodies." Harrelson has been lauded on social media for calling this person out. She further stressed on the fact that journalists aren't meant to become an "eye candy." She said: "WE ARE NOT YOUR EYE CANDY." She further wrote, "Luckily, after nearly nine years in this business, I have a very thick skin.

But I feel sorry for the young women breaking into news who will have to deal with that kind of criticism, which their male colleagues will almost certainly never face."

"You look mighty big on TV!"

That's what a complete stranger just said to me.

FYI - journalists are not models... And I can assure you, none of us want to hear your opinions on our bodies.

WE ARE NOT YOUR EYE CANDY. pic.twitter.com/TbDwCTSb6P

In a follow-up comment on Facebook, she further said “The sad thing is, this guy said this to my face and was completely shocked when I told him that's insulting and not an acceptable thing to say to anyone." Netizens are coming out in support of the news anchor. Many times women taken the rough road to teach a lesson to such fat shamers. Just earlier this year, a body-shaming priest who said 'fat women don't go to heaven' pushed off stage by an irate woman in Brazil. A dramatic video of a woman pushing a priest off the stage during a public sermon has gone viral on social media. The clip shows the woman running towards the priest who is preaching on a podium and pushing him down with her hands. It is said that woman did the act after the priest told listeners that 'fat women don't go to heaven'. The audience stood from their seat in horror as the woman knocked over the priest.

(The above story first appeared on LatestLY on Nov 05, 2019 10:24 AM IST. For more news and updates on politics, world, sports, entertainment and lifestyle, log on to our website latestly.com).