The severed hand and wedding ring of a Scottish tourist was found inside a 10-feet tiger shark in the Indian Ocean. Forensic scientists discovered the hand during the autopsy of the marine animal as it was considered a threat. 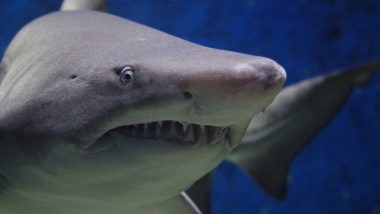 The severed hand and wedding ring of a Scottish tourist was found inside a 10-feet tiger shark in the Indian Ocean. Forensic scientists discovered the hand during the autopsy of the marine animal as it was considered a threat. While DNA tests are yet to be carried out on the hand, the wedding ring has confirmed the identity of the man. Reportedly, scientists from the CSR Shark Safety Centre have been told that the wedding ring on it 'conformed to one identified by the man's wife. The 44-year-old unnamed name went missing after spending a week on the island of Reunion in the Indian Ocean. He and his wife had been spending a week when the man went swimming alone in the Hermitage Lagoon, off Saint-Gilles. Shark Bites Off a Tourist's Leg and Injures Another While Snorkelling Near Great Barrier Reef in Australia.

Metro quoted an investigating source as saying, "When he did not get back, his wife sounded the alarm, and a full search was launched, involving boats and a helicopter. ‘Divers searched around a coral reef in the area, and there were also patrols on land involving sniffer dogs. Sadly, the man could not be found." Shark attacks are quite common around the French overseas territory which is located some 500 miles from Madagascar. Due to which swimming and other water activities are restricted on Reunion. In a similar incident earlier this year, the leg of a 28-year-old surfer was ripped off by a shark. The body part was later found floating in the port of Saint-Leu. Narrow Escape For Boy After Great White Shark Leaps Out of Water at Cape Cod Bay, Almost Bites Him (Watch Video)

The latest incident is the 24th shark attack and the 11th fatal one reported on Reunion since 2011. Following which, the local government urged visitors to be careful as bull sharks are plenty in the region. French President Emmanuel Macron said his government was doing everything possible to deal with the shark crisis during his visit to Reunion last month.

(The above story first appeared on LatestLY on Nov 07, 2019 08:52 AM IST. For more news and updates on politics, world, sports, entertainment and lifestyle, log on to our website latestly.com).