As much as people are excited about the next season they also do not want the series to end. Some have taken to predicting the plot too. Have you been following the show all this while? 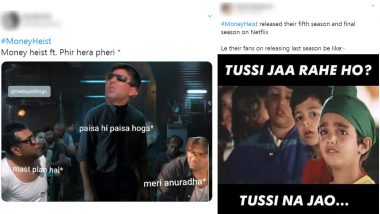 If you have regularly streaming Netflix then you'd have seen the Spanish hit series La Casa De Papel or better known Money Heist. After the season 4 released in April, netizens binge-watched on to the crime drama series and cannot wait for the next season. And Netflix teased all viewers as it announced the fifth season of Money Heist as the finale of the show. Soon after the announcement fans took to social media to share their excitement with funny memes and jokes. #MoneyHeist and #MoneyHeist5 are trending on Twitter since last night after the show's finale announcement. Some are disappointed that it will be the final while others cannot wait to dissect the plot of what happens in Part 5.

The high on adrenaline series showing looting of the banks by Professor and his team stopped at an interesting point in Season 4. Right after the season 4 streamed, fans were eagerly waiting for next season and Netflix has confirmed that it will be the series finale. When the final season will be out is uncertain but it would likely be in summer 2021 as the shooting is about to begin. According to Variety, the shooting for the last, and the final season will begin soon in Spain, Denmark, and Portugal. But Netflix's announcement was enough to get people buzzing with reactions, of funny memes and jokes on Money Heist. Álvaro Morte AKA Professor's 'Farewell' Video From The Sets Of Money Heist Will Make Your Heart Skip a Beat!

Check How Fans Reacted to the Announcement:

When it Hits You

Fifth season of #MoneyHeist is announced but it is the last season as well pic.twitter.com/2tgHF6wxYj

Whenever I see Arturo Roman pic.twitter.com/txf1Oeievk

Waiting for The Release

All I want is this MF to be killed in the final season or else I'm doing it.💀#MoneyHeist pic.twitter.com/DbZCPMZNon

A Crossover We Did Not See

Waiting for professor to say that

#MoneyHeist released their fifth season and final season on Netflix

Le their fans on releasing last season be like:- pic.twitter.com/CyVFogUCZa

As much as people are excited about the next season they also do not want the series to end. Some have taken to predicting the plot too. Have you been following the show all this while? If yes, we are sure you'd be definitely excited for the new season. But mixed feelings about it being the last one, you're not alone.

(The above story first appeared on LatestLY on Aug 01, 2020 08:47 AM IST. For more news and updates on politics, world, sports, entertainment and lifestyle, log on to our website latestly.com).