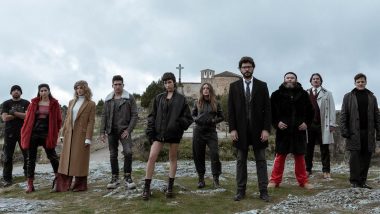 And the much awaited moment is here! After various theories and speculations, the announcement of the fifth seaoson of La Casa de Papel is here! Yes, Money Heist season 5 is officially announced by Netflix to the delight of the fans. However, the bad news is it also hints it to be the last season ever, probably ending the show. The fans are obviously losing their calm on social media.

Netflix's official Instagram account posted the picture of the Dali mask on the ground, smeared with mud. The caption reads as, "part 5: the heist comes to an end. #lacasadepapel #moneyheist." The post has opened up the bag of memories of the fans and they are expressing their thoughts on the new and last season of the popular Spanish series.

Please atleast extend the season upto 6-7😭 Ending in season 5 itself is not done! We will badly miss the HEIST!❤️ It will always be in special place in our 💓 #MoneyHeist5#MoneyHeist#LaCasaDePapel5 @lacasadepapel pic.twitter.com/WwrQ206Hqt

Me waiting for Season 5- pic.twitter.com/CfjFgFvKxR

I can't believe season 5 is the finale for #MoneyHeist 💔💔 pic.twitter.com/dxod1fpffQ

Alvaro Morte aka Professor also shared the same image on his Instagram account. He wrote, "It looks like we are coming to an end..." The last episode of season 4 had a cliffhanger ending, making everyone curious about the next part. It is also reported that the Professor’s closing act will include new characters played by Miguel Ángel Silvestre and Patrick Criado. What are your thoughts on watching Professor and his team, one last time?

(The above story first appeared on LatestLY on Jul 31, 2020 09:55 PM IST. For more news and updates on politics, world, sports, entertainment and lifestyle, log on to our website latestly.com).