Mumbai Auto Driver's Honesty Gets Paid off: Returns Bag With Rs 80,000 And Earns Education For His Children

The auto driver was felicitated and awarded Rs 10,000. 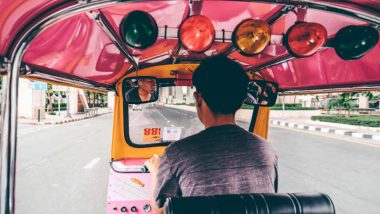 Haven't you heard the quote which says 'The Good You Do Comes Back To You'? That's exactly what happened to Mumbai auto driver Amit Gupta when he returned something he did not own. The story begins two months ago when Sarla Namboodiri, a 68-year-old who runs Arunodaya English School for primary and preprimary children in Chembur parked her car a little away from the school as usual. While returning, she took Gupta's auto to reach her parked car as she has difficulty walking. She got off the auto and Gupta left, only after which Namboodiri realized she forgot her bag in it.

However, luckily, half an hour later, Gupta returned to school with the bag saying that another passenger had spotted the bag and he remembered it was Namboodiri's. She told TOI, "After he left, it struck me that I hadn't taken his contact details and I wanted to do something for him. I approached the paan vendor, but the phone number he gave me was wrong."

Namboodiri, however wanted to do something for the man and continued her hunt. Earlier this week, she managed to trace Gupta and called him to the school. Namboodari found out that he wasn't doing financially well and couldn't afford to send his children to school. Namboodari being a former teacher decided to provide free education to his children. Gupta was felicitated and awarded Rs 10,000. She said, "Had Gupta not brought my bag back, I would have had to face a lot of trouble."

(The above story first appeared on LatestLY on Mar 10, 2018 04:10 PM IST. For more news and updates on politics, world, sports, entertainment and lifestyle, log on to our website latestly.com).