Photo of an orangutan offering an arm to the man standing inside a river has gone viral on social media platforms. The photo was clicked by photographer Anil Prabhakar, from Indonesia who was on a safari with his friends. 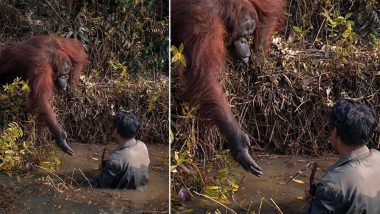 Photo of an orangutan offering an arm to the man standing inside a river has gone viral on social media platforms. The photo was clicked by photographer Anil Prabhakar, from Indonesia who was on a safari with his friends. The animal lives in a protected conservational forest area in Borneo. Reportedly, the man worked for the Borneo Orangutan Survival Foundation, a non-profit organisation which is aimed at protecting the endangered species. The worker was clearing snakes from the rive to save the orangutans from snake bites. Anil who witnessed the scene said that the man refused the orangutan's help as it is a wild animal. Dog Holds His Owner's Hand While Crossing The Street in Nepal, Watch Cute Video Going Viral.

Daily Mail quoted Anil as saying, "Someone told him there was a snake in the river. The warden went there and cleared the bushes. An orangutan came to the banks and was watching what he was doing. He then came closer and gave his hand. The warden just moved away. I asked him why later and he said, 'It's a wild animal, not one we are familiar with'." Anil posted the photo on Instagram with the caption, "Let me help you? : Once Humanity dying in Mankind, sometimes animals are guiding us back." Video of Clumsy Baby Elephant Chasing Dogs Is Your Today’s Serving of Utter Cuteness!

Orangutan Stretches an Arm to Help a Man:

The Borneo Orangutan Survival Foundation is an Indonesian non-profit organisation founded in 1991. It has 400 members of staff, is currently taking care of almost 650 orangutans. This is not the first time animals were captured showing their tender side with humans. Multiple times in the past, video and pictures of monkeys, dogs, cows being kind to humans have been clicked.

(The above story first appeared on LatestLY on Feb 07, 2020 01:36 PM IST. For more news and updates on politics, world, sports, entertainment and lifestyle, log on to our website latestly.com).