Oshiya or Professional Pushers Are Employed to Push People in Crowded Trains in New York, Beijing and Tokyo! Watch Video

Working during the morning and evening peak hours, these pushers have to ensure that all the people are in the train compartment so that the automatic doors can close in swiftly. 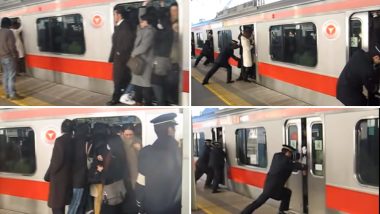 The train network is one of the efficient ways of internal transport in several countries. And with the convenience of time and speed, most of the daily workers use the trains to reach their workplace. The train network in Japan is known all over the world for its speed and punctuality. The people have a name for their work dedication and not even letting a minute go to waste. Since most of the people use the metro trains to reach work, the peak hours of travelling are literally brimming with people. Oshiya or a pusher is a job profile and it involves immense strength as one has to just push the people in the train. Working during the morning and evening peak hours, these pushers have to ensure that all the people are in the train compartment so that the automatic doors can close in swiftly. Not just Japan, other countries like China, the Madrid Metro and New York City Subway also use the pushers.

The idea of the pushers first originated in New York City, almost a century ago. But today, it is associated with the Japanese more. These pushers have different terms in different countries but the basic idea is to push people in the train to fit them. Madrid Metro started with Oshiya quiet recently in the year 2017. The first use of pushers was seen in the 1940s where the subway guards performed similar duties to psuh people in the train. All these busy stations have trains coming in and moving away swiftly without any delay. The trains run over their capacity but these pushers ensure no one feels left out! Japanese Experts to Assist Indian Architects Develop Bullet Train Stations.

These are properly uninformed people with one goal to cram as many people as possible in the train. They were initially called "passenger arrangement staff." Although there is no dedicated qualification required, many students and part-time workers fill in these positions. Sometimes the station staff also work as the pushers. Isn't is amusing to have people pushing others to make things more efficient? Can you imagine something like this to be employed in the Indian railway system?

(The above story first appeared on LatestLY on Nov 19, 2018 04:52 PM IST. For more news and updates on politics, world, sports, entertainment and lifestyle, log on to our website latestly.com).