Pet Cat's Reaction on Woman Teaching Her Dog to Swim Has Left the Internet in Splits! (Watch Funny Video)

A cat's reaction to its human teaching the dog swimming has got the internet laughing. The funny video is being shared widely on social media. 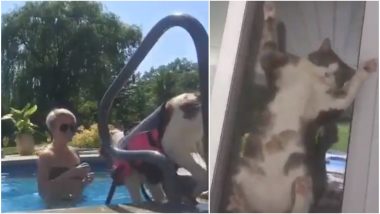 Hello people with multiple pets at home, here is something you can relate to on a daily basis. Especially, when there are a cat and a dog, chances are that, in the initial stages, you are just trying to save the house from a catastrophe. However, many-a-times they get along, much to the peace of the humans. A recent video of a woman trying to teach her dog to swim has gone viral on social media. While she was concentrating on the dog, her cat put up a show in the background. Video of the incident has gone viral on social media with people laughing their hearts out. Viral Cat Video Is Inspiring Hilarious Memes, Check ROFL Tweets.

The video shows the woman inside the pool telling her dog to jump into the pool. Meanwhile, he looks up and sees her cat, Gilbert stuck up on the window pane. She rushes out of the swimming pool towards the cat, but it continues to balance itself weirdly on top of the window. The video is being shared widely on social media. Twitter user Emma Stiers posted the video on Twitter with the caption, "So my sister tried taking a video of my dog learning to swim and." This Video of a Pet Dog and Cat Loving Each Other is Going Viral, Watch Cute Clip.

So my sister tried taking a video of my dog learning to swim and- pic.twitter.com/oirYpA8QAN

that’s what you get for naming a cat gilbert

Yes, we need to know

I'm so confused how is Gilbert hanging there? Which side of the glass is he on?? How is he stuck on to that window!! pic.twitter.com/I0GpSh0FFN

People can' get over Gilbert's expression

That "Oh, shit!" expression though. 😂 pic.twitter.com/jgFoclg0qt

The video has been viewed more than 2.97 million times and has received over 2.66 lakh likes. As the video went viral, people commented on how their cats have put them in similar situations. Twitter user Joanne Stassen commented saying, "Sure the DOG gets attention for zero skilz but the CAT shows a little initiative and it's all 'WTF GIL-bert! (sic)" One of the Twitter users joked that he thinks his cat is also related to Gilbert and the feline does similar things at home.

(The above story first appeared on LatestLY on Jun 30, 2019 03:56 PM IST. For more news and updates on politics, world, sports, entertainment and lifestyle, log on to our website latestly.com).