This Video of a Pet Dog and Cat Loving Each Other is Going Viral, Watch Cute Clip

It is one of the sweetest encounters seen between a dog and a cat and it will just make you feel so good. 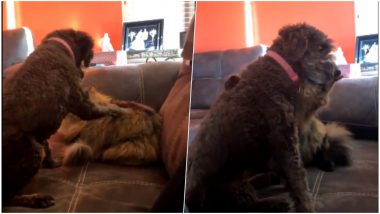 Dog and cat loving each other (Photo credits: Video grab)

Dogs and cats are most commonly kept pets at home. And there are few instances when these two animals actually get along. It is most often observed that dogs chase cats and cats do not react very friendly in presence of dogs as well. But then are also cases where cats and dogs stay at peace under one roof. While there are enough videos on the internet about cats and dogs getting along, this one particular video shared by a pet parent on Twitter is a good addition. In fact, it is one of the sweetest encounters seen between a dog and a cat and it will just make you feel so good. The short video clip shows a dog patting a cat and the cat then hugging the dog in return. The cute interaction is going viral on the internet. Naughty Kid Pushes Dog From Her Ride Is the Cutest Video on the Internet.

The video was shared on Twitter by a user named Jordan of his two pets, a dog named Maggi and a cat named Pumpkin. In the video, Maggi is seen patting Pumpkin and then Pumpkin quickly gets up and hugs Maggi. It is a small clip but extremely adorable. The video has got a tremendous response with over 4 million views in just about a day. An Adorable Cat Named Dog is Selling Fish in Vietnam, See Cute Pictures of the Feline Seller.

Did my dog just pet my cat?? And did my cat just hug my dog?? pic.twitter.com/PuNWB1Ggzw

Isn't it simply adorable? It looks like the two greet each other like this regularly. With this video getting such a huge response, the owner shared another video of the two, in which they are seen hugging tightly as they sleep!

Here is another one for y’all to enjoy 💕 thanks for all the love pic.twitter.com/VS16s1QMWa

And some Twitter users sure had funny responses to their love.

Please make an Instagram page starring these two. The world needs it. ❤️

The love between these two hearts is melting hearts of many people online. They are indeed cute. Not all cats and dogs get along so well but Maggie and Pumpkin are spreading much love on the internet.

(The above story first appeared on LatestLY on Dec 30, 2018 07:07 PM IST. For more news and updates on politics, world, sports, entertainment and lifestyle, log on to our website latestly.com).