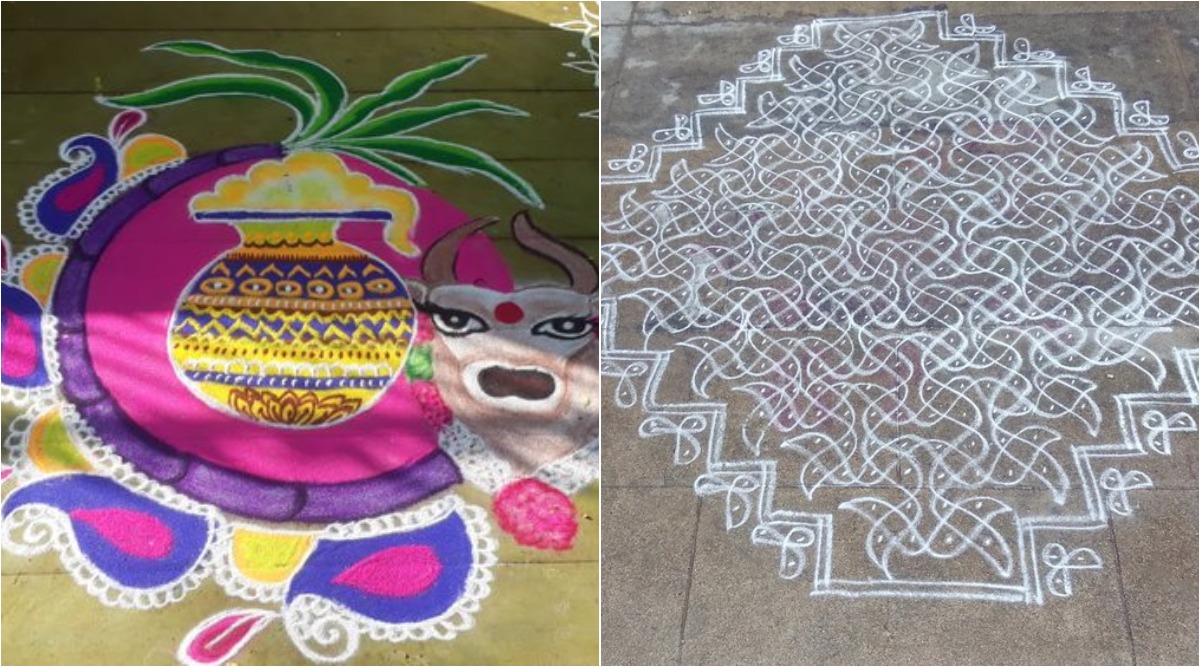 Pongal is here and celebrations are in full force. Being the harvest festival of Tamil Nadu, the observance witnesses various festivities. It is celebrated observing varying customs, traditions and practices in the state. Kolams or rangoli also knowns as Sankranthi Muggulu are an important part of the celebrations. Kolams are generally made out of rice powder are drawn outside doors of houses as it is considered auspicious. And people have taken to the internet sharing pictures of kolams drawn outside their houses, at community centres and other places. Beautiful pictures of easy kolam are being shared widely on social media platforms. Simple Rangoli Designs for Makar Sankranti 2020: Quick and Beautiful Rangoli Patterns to Celebrate the Harvest Festival (Watch Videos)

Kolams include images of flowers, animals, birds, paddy fields, sugarcanes and many other things depicting Pongal and the related festivities. Pongal is a four-day harvest festival which begins on January 15 and continues to January 19. And if you want to draw kolams outside your house, then we have got you covered. Check out easy and beautiful kolam designs which you can try this Pongal.

Pongal Bird Count starts today! Here is a magnificent Kolam to mark the event, shared by Elavarasan Malaiyappan from his home in Ariyalur, Tamil Nadu.https://t.co/eJVyFy5nUb pic.twitter.com/6UPG7NNhqA

Hope your pongal went on well.

Colour kolam by one of my school friends. She does this awesome incredible kolams throughout margazhi month..🥰🤗🤗👌👌 pic.twitter.com/4qQ6EyhX7u

My mother: draws this Kolam in 10 mins

Me: struggling to draw a straight line even with the help of a scale pic.twitter.com/0wQWelgBg2

While traditionally kolam is drawn using only the white colour, people also add colours to lift the look of it. Kolams or rangoli can be simple or intricate ones. While for some it would be the simplest of work to do, for others it could be a complicated one. Meanwhile, we wish everyone a Happy Pongal!