Pups' Loyalty! Dog Waits For Owner Outside Turkish Hospital for Days Before Finally Being Reunited With Joy, Other Times When Pooches' Love Towards Their 'Hoomans' Made Us Teary-Eyed! (Watch Videos)

A video is going viral, showing a dog who patiently waits for her owner outside Turkish hospital for days, before she could finally reunite with him with joy. As the video will bring happy tears in your eyes, here are we bring you other times when pooches’ loyalty and kindness touched netizens’ heart. 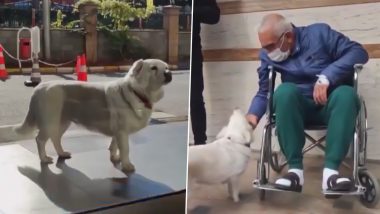 We all know how much loyal our pets are towards us. A dog is a man’s best friend—the saying goes far and beyond as, over the time, we have come across with so many instances that proved why pooches are the best companion we could ever ask for. Whether you are a dog lover or not, you must have shed tears of sorrow when you heard the story of Hachiko, the Japanese Akita dog who is known for his remarkable loyalty to his owner. Over time, we came across many instances too, that proved our furry friend’s faithfulness towards their hoomans. Now, a video is going viral, showing a dog who patiently waits for her owner outside Turkish hospital for days, before she could finally reunite with him with joy. As the video will bring happy tears in your eyes, here are we bring you other times when pooches’ loyalty and kindness touched netizens’ heart.

Ever since her beloved owner was hospitalized, this dog walks to the hospital every day and sits outside, waiting to see him 😢 pic.twitter.com/0erjUUH45w

The devoted dog, named Boncuk (Bon-DJUK) reportedly followed the ambulance that transported her owner, Ceman Senturk to hospital in the Black Sea city of Trabzon. He was taken to the hospital on January 14, and his loyal dog would make daily visits to the facility. Senturk’s daughter, Aynur Egeli, reported that she would take Boncuk home, but the dog would repeatedly run off and return to the hospital. This week, the loyal dog was finally reunited with her owner when he was pushed outside in a wheelchair for a brief meeting with his dog. Senturk was discharged from the hospital, on January 20 and returned home with his best friend, Boncuk. Loyal Dog Madison Who Survived California Fire Found Guarding Owners’ Burnt Home for a Month.

Leia Waiting by the Door For Her Owner

A similar tale of loyalty was reported from the US, last year, where a loyal dog, German Shepherd, Leia, was seen waiting by the door for her dad to return home from the hospital. The heartbreaking moment was captured and shared on the internet. The pair were finally reunited.

A family dog in China spent most of the day waiting for his owner to come home. The CCTV footage revealed the border collie, named Pi Dan or ‘Naughty,’ staring into the distance while quietly resting in the same spot from morning till night. Soon as the pooch spotted his owner returning from afar, the canine rushed to the door to greet her while leaping for joy.

Xiao Bao Waits for Owner Who Died of COVID-19

Unlike the above instances, this dog’s wait never awarded the pooch with a reunion. The Japanese dog, named Xiao Bao waited for three months for the return of his owner at a Wuhan hospital, who died of COVID-19.

These are some of the incidents that once again proved why dogs are the best companion one can have. They fill our lives with love, loyalty, fur and plenty to smile about.

(The above story first appeared on LatestLY on Jan 22, 2021 02:14 PM IST. For more news and updates on politics, world, sports, entertainment and lifestyle, log on to our website latestly.com).