Dog Waits For Owner Who Died of COVID-19 at Wuhan Hospital for Three Months, Reminds Netizens of Hachikō! (See Pictures) 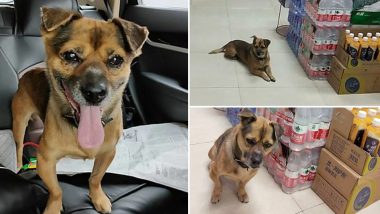 A Japanese dog waited for three months for the return of his dead owner at a Wuhan hospital in China. As pictures of Xiao Bao went viral, netizens were reminded of Hachiko, a Japanese dog which waited for nine years for his dead owner's return. In the recent case, the seven-month-old was spotted sitting outside the lobby of a hospital. Its owner died of coronavirus five days after being admitted in February. Not knowing the whereabouts, Xiao Bao continued to wait for his favourite human to return. Dog Saves Girl from Falling and Drowning, Viral Video Leaves Internet in Tears.

During the waiting period, the staff at Wuhan Taikang Hospital in Central China’s Hubei Province fed the animal. After a month of waiting, the dog was recently shifted to a dog shelter. A shopkeeper named Wu Cuifen who was taking care of the dog told Metro, "I first noticed the little dog when I returned to work in the middle of April. I called him 'Xiao Bao'. That’s the name I gave him." Dog Saves Injured Koalas From Australian Bushfires by Sniffing Their Faeces and Fur (See Pictures)

He Refused to Leave:

Staff said Xiao Bao refused to leave. Even when they deliberately dropped him off somewhere far away, he would make his way back to Taikang Hospital and patiently wait for his owner pic.twitter.com/204kAG9eEi

This is so sad.Hope someone with good heart adopts him.

Hello there "brother" of hachi...

Someone adopt him please💜

Reportedly, the dog refused to leave the hospital when it was changed to a different hospital. But as then hospital staff received complaints about Boa, they finally Wuhan Small Animal Protection Association. There he was treated, sterilised and is being taken care of.

Hachikō was a Japanese Akita dog who is known for his remarkable loyalty to his owner, Hidesaburō Ueno. He waited for nine years following his owner Ueno's death. Hachikō was born on November 10, 1923, at a farm near the city of Ōdate, Akita Prefecture. A movie based on its life Hachi: A Dog's Tale was released in 2009. It is an adaptation of the 1987 Japanese film Hachikō Monogatari.

(The above story first appeared on LatestLY on May 28, 2020 08:33 PM IST. For more news and updates on politics, world, sports, entertainment and lifestyle, log on to our website latestly.com).