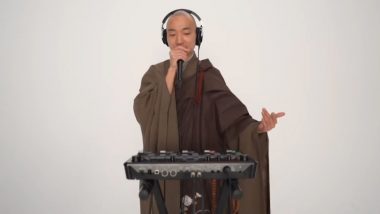 Did you think monks weren't cool? Well, you certainly haven't read about this uber-cool beatboxing monk who has become an internet sensation. Loved by all, this monk creates music that upgrades the Buddhist chants to beatboxing tracks. Can you believe it? The soulful Buddhist chants into cook beatbox music! Yes, Yogetsu Akasaka who describes himself as a "Japanese Zen Buddhist monk, beatboxer/handpan player and live-looping artist" on Instagram is an extremely creative artist who is very popular for creating fusion tracks mixing religious chants and beatboxing with the help of a loop station, a live performance tool.

With the help of the loop station, that he bought in 2009, Yogetsu records and playbacks in real-time. He was ordained as a monk in 2015 and he has been beatboxing for over 15 years. He is said to have to layer the track with multiple vocals and then manipulates the beats to create his own unique brand of music. According to news agency South China Morning Post, it was when he organised a live streaming session of his music online during the lockdown that his music reached more people. Watch Video:

His video ‘Heart Sutra Live Looping Remix’ has over nine lakh videos on Youtube. Attributing his fame and success to the pandemic and the lockdown that followed, the 37-year-old said he saw it as an opportunity to change young people’s perception of what Buddhism is.

“Most of them believe Buddhism is something for a person who died already. But it’s actually not. So maybe, if my music attracts younger people, it will be a good opportunity for them to know about Buddhism.” he told news agency AFP.

(The above story first appeared on LatestLY on Aug 13, 2020 09:03 PM IST. For more news and updates on politics, world, sports, entertainment and lifestyle, log on to our website latestly.com).