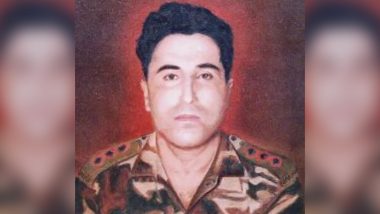 Captain Vikram Batra died fighting Pakistani intruders at the Indian border during the Kargil war on July 7, 1999. On the martyr's 21st death anniversary, people have taken to Twitter remembering the courage and might of the Indian soldier. People are paying tributes to the later Indian soldier on his 21st Martyrdom Day. Shaheed Captain Batra was posthumously honoured with Paramveer Chakra, India's highest military award. Today, Twitterati are remembering Captain Vikram Batra for the ultimate sacrifice he made for his nation. Many are sharing the captain's photos on Twitter with the hashtag #vikrambatra. Shaheed Captain Vikram Batra 21st Death Anniversary: Remembering the 1999 Kargil War Hero.

Vikram Batra was born on September 9, 1974, in Palampur, Himachal Pradesh and joined the military on December 6, 1997, with the 13th battalion of the Jammu and Kashmir Rifles of Indian Army. The Captain was posted in Shahjahanpur district in Uttar Pradesh when he was summoned to join the troops in Dras sector of Jammu and Kashmir as Kargil war began in the valley. Captain Vikram Batra is known for portraying bravery during tough times and leading the troops.

Words can't describe the SACRIFICE he made for this Great Nation.

The level of RESPECT this guy has earned from the country is INCOMPARABLE.

The Nation will always be grateful & thankful to you Sir.

Paying Tributes to His Bravery!

The Sher-Shah of Kargil, Captain Vikram Batra, Who Fight for the Inches of Indian Land, captured many posts of Pakistan without any Casualties but Unfortunately, Today,At the time of KARGIL,We Lost our Hero.

21 years ago I met the extraordinary #VikramBatra, Code name, Sher Shah, the swashbuckling soldier who was one of the first interviews I did at the #Kargil frontline and would be the first obituary tribute I'd write as well. It feels like yesterday to me. I can hear his laugh 1/n pic.twitter.com/TPUzSv1oeZ

For me #vikrambatra lives on in my heart and through my bond with his twin @vishalbatra1974. Some people you meet in life are like that. Eternal pic.twitter.com/FCsF1l09oG

Remembering the Brave Capt. #vikrambatra, These word can tell you the amount of love he was having for #india

Captain Batra reached Dras on June 6 and was kept on the reserve for the second battalion of Rajputana Rifles by the 56 Mountain Brigade. The second battalion of Rajputana Rifles was tasked to recapture the Tololing mountain ridge from Pakistani intruders. It is a known fact that the fight for Tiger Hill was the fiercest battle in the Kargil war. On June 20, Captain Batra led his team in the fight for control of the Peak 5140. After gaining it,  on July 7, Batra started the mission to reclaim Point 4875 in Mushkoh Valley. However, in the process, Captain Batra was hit by a bullet immediately killing him.

(The above story first appeared on LatestLY on Jul 07, 2020 11:13 AM IST. For more news and updates on politics, world, sports, entertainment and lifestyle, log on to our website latestly.com).