With people rushing for WhatsApp’s alternatives such as Signal and Telegram, it is more obvious for netizens to share hilarious reactions on Twitter. But there seems no end to it. #SignalApp funny memes and jokes continue to rule online. 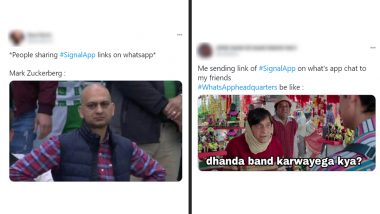 We don’t think so, the funny memes and jokes around WhatsApp Privacy policy are going to end soon. After all, the reactions are only increasing after each passing day. Even though, the Facebook-owned app released clarifications and assured there wouldn’t be any privacy breaching, social media users are having their share of fun in creating memes. With people rushing for WhatsApp’s alternatives such as Signal and Telegram, it is more obvious for netizens to share hilarious reactions on Twitter. But there seems no end to it. #SignalApp funny memes and jokes continue to rule online as WhatsApp users decide whether to switch to Signal or Telegram or continue using the Facebook-owned app.

According to the latest report, Signal, Telegram grabbed about 40 lakh, new users, since WhatsApp sent a notification for accepting the new privacy policy. That’s huge! World’s richest man, and Tesla CEO Elon Musk also had a significant role to play, after he tweeted, ‘Use Signal,’ which sparked a meme-fest on the internet. With a significant number of the switch to other alternative apps, meme-makers are surely having a joyous time as they continue curating humorous content on Twitter.

Following WhatsApp’s announcement, alternative messaging apps are seeing a sudden increase in demand. WhatsApp is facing severe trust-crisis. The Facebook-owned app released FAQs post, adding that the policy, “does not affect the privacy of your messages with friends or family in any way.” But people have got no chill! With the increase in the number of people switching to Signal and Telegram, social media is filled with hilarious reactions you must not miss.

People are moving to #SignalApp from WhatsApp in droves. Welcome. You will love the "Note to self" feature. Happy to see a boost for #OpenSource too. pic.twitter.com/tNVPE3mzjx

Me sending link of #SignalApp on what's app chat to my friends#WhatsAppheadquarters be like : pic.twitter.com/JGsZGtUEKv

Me:- Time to say bye to you whatsapp

Me sharing #SignalApp link to my whatsapp contacts

Me waiting for my friends to switch to signal so I can delete WhatsApp:#SignalApp pic.twitter.com/U82NWqV45L

So, what’s your take in the latest WhatsApp privacy policy? Are you planning to switch too? Before you decide, note that the online messaging app or Facebook can see your private messages or hear or calls. WhatsApp, Signal or Telegram, the choice certainly is yours!

(The above story first appeared on LatestLY on Jan 12, 2021 09:02 PM IST. For more news and updates on politics, world, sports, entertainment and lifestyle, log on to our website latestly.com).