Are Signal & Telegram the new WhatsApp? At least that is what it looks like Twitter with people making funny memes and jokes about the new apps that are all set to take the place of WhatsApp after the new privacy policy update. 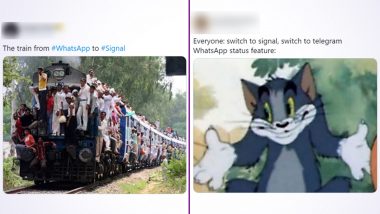 Are Signal & Telegram the new WhatsApp? At least that is what it looks like on Twitter with people making funny memes and jokes about the new apps that are all set to take the place of WhatsApp after the new privacy policy update. However, while people are looking out for different options they have over WhatsApp, Elon Musk helped people clear the confusion. He recently, tweeted out "Use Signal"  on January 7th and if the richest person on the planet says so, it is no less than a command. He received loads of traction on the tweet and the fairly unknown app noticed a significant spike in the number of new users right after Elon Musk's tweet. Elon Musk Advocates Signal App over WhatsApp After the Updated Privacy Policy! From Download to Set up & Fun Features, Everything You Need to Know About the Encrypted Messaging Service.

However, not everyone got the right signal after Elon Musk's 'Use Signal' tweet! Many ended up subscribing to unrelated company's stock with a similar name, giving it 1,100% surge.  Regardless, all Elon Musk did was just said: "Use Signal" on Twitter recommending this app over WhatsApp and it ended up getting new users.  WhatsApp Account Will Be Deleted if You Failed To Accept Updated Terms of Service & Privacy Policy, Here’s Why.

Even otherwise people were recommending Telegram which is another alternative to WhatsApp. So Signal and Telegram seem to be like the suggestions from the majority of the population, however, that didn't stop memers from making funny memes and jokes about how people are moving on to different alternative leaving WhatsApp (which is one of the most commonly used messaging app) behind! Check out funny memes and jokes.

The train from #WhatsApp to #Signal pic.twitter.com/2bJnszGAEh

Me to whatsapp after downloading telegram: pic.twitter.com/y7MRooLjq2

Well, while those were the jokes BUT on the less lighter note, WhatsApp users have received an in-app notification from WhatsApp as part of an upcoming global roll-out for over 2 billion users, asking them to either accept the changes in its Terms of Service and privacy policy by February 8 or their accounts will be deleted. The in-app notification did not elicit much details but clicking on the links clearly mentioned the key changes in how WhatsApp will collect and process users' information going forward, and the partnership with Facebook, its parent company, as part of a larger unification drive between the family of apps. In its updated policy, WhatsApp said that if "you use our Services with such third-party services or Facebook Company Products, we may receive information about you from them".

(The above story first appeared on LatestLY on Jan 10, 2021 10:55 AM IST. For more news and updates on politics, world, sports, entertainment and lifestyle, log on to our website latestly.com).