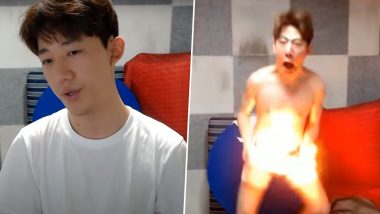 Keeping your words while doing live-stream videos are okay, but maybe not always and in every circumstance. While online gaming stream is a big hit on the internet today, there are times when YouTubers seem to ignore to calculate what could be the repercussions of their actions, especially, when it comes to accepting a dare from followers. Case in point: YouTuber Shin Tae Il who set his crotch on fire during a live stream gaming video. Why? According to media reports, one of his viewers suggested a penalty for the YouTuber, which was to set his private area on fire for a few seconds, if he does not come in first place in the videogame, ‘Fall Guys.’ He could not come in the first place and ‘kept his words.’ At the end of the live-steaming video, the South Korean YouTuber can be seen setting his genitals on fire and yelling out in pain. He suffered from second-degree burn, and the video of his act live on camera has gone viral on the internet. ASMR Mukbang YouTuber Ssoyoung Eats Live Octopus and Other Sea Animals; Receives Backlash, Critics Call Her ‘Cruel’.

Shin Tae Il, who is also known as the infamous, ‘angry Korean gamer,’ communicated through a live broadcast on his YouTube channel on August 6, 2020. His videos are mostly doing a live broadcast and playing videogames with his viewers. According to US-based Korean pop blog, Allkpop, one of his viewers suggested a penalty for YouTube if he does not come in first place in the videogame called, Fall Guys. Shin Tae Il accepted the challenge. He could not come in first place in the video game, and as a penalty, viewers suggested him to set his private area on fire for about a few seconds. Revenge Served Cold! Chinese Blogger Attacked, Face Disfigured By Octopus While She Tried to Eat it Alive.

He agreed and at around 3-hour-15-minute mark, viewers saw the South Korean YouTuber coming back on the screen, wearing only his underwear. He began to pour lighting fluid on his private area and brought the lighter. Pausing for a few seconds, he sets his crotch on fire. He ran out of the camera frame, yelling in agony. The YouTuber stayed on the floor, moaning and says he is in a lot of pain, before he ended the live stream.

The YouTuber reportedly updated his fans through his social media account about his health condition. He mentioned that he visited the hospital and suffered from second-degree burns. YouTuber or not, no one should try this as a dare. You may end up with the said gamer’s injuries, or even worse.

(The above story first appeared on LatestLY on Aug 10, 2020 10:04 AM IST. For more news and updates on politics, world, sports, entertainment and lifestyle, log on to our website latestly.com).