Sudarsan Pattnaik is known for making topical sculptures on the sand and gives beautiful messages along with. 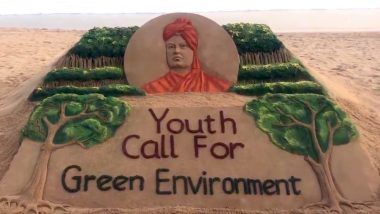 Sudarsan Pattnaik is known for making topical sculptures on the sand and gives beautiful messages along with. People come from different parts of the city to witness his beautiful display of skill. On every special occasion, he ensures he makes a creative display. Today also being Youth Day he gives a message, "Youth Call for Green Environment." It is a beautiful sculpture with Swami Vivekananda's caricature surrounded by trees. Using the exact colours, it makes the art look prettier. Santa Claus With Plastic Bottles! Sand Artist Sudarsan Pattnaik Attempts World Record on 2018 Christmas Eve Creating Environmental Awareness.

On the occasion of #SwamiVivekananda⁠ ⁠ birth anniversary,⁠ ⁠ My SandArt with message “Youth call for Green #Environment at puri beach in Odisha . pic.twitter.com/IHALEAsVN0

Pattnaik has time and again used his art to highlight the importance of the environment. Using Swami Vivekananda's birth anniversary and also the significance of Youth Day, he gives a similar message once again. Swami Vivekananda was the one who represented India and the Hindu philosophy, the idea of Yoga and Vedanta to the outside world. He spoke about how our thoughts shape our lives and how does one achieve their goal. He inclined a lot of people to follow the path of spirituality and to propagate his ideas he also started the Ramakrishna Math and Ramakrishna Mission.

(The above story first appeared on LatestLY on Jan 12, 2019 12:16 PM IST. For more news and updates on politics, world, sports, entertainment and lifestyle, log on to our website latestly.com).