‘Tom Holland’ Thinks He Has Destroyed Prospects of Spider-Man: No Way Home in India After Author Tweets on Narendra Modi Cricket Stadium

Tom Holland, an English author, commented on naming a stadium after PM Narendra Modi. That alerted all Spiderman fans fearing the worse that people will start trolling the actor Tom Holland who plays the character in Marvel movies. 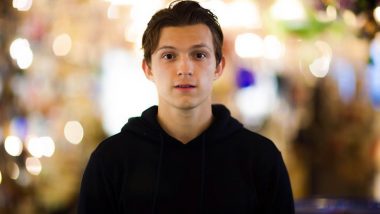 The world's largest stadium in India has been named after PM Narendra Modi recently. Tom Holland commented on it saying, "I’m a huge admirer of the modesty Modi showed in naming the world’s largest cricket stadium after himself." He further added to it saying, "Not always a good sign for countries when leaders start pulling that trick..." Now, this guy isn't the actor who plays Spiderman in Marvel movies. Tom Holland here is an English author who has written several books. However, people on Twitter are extremely worked up for the Spiderman guy as they fear he will be pulled up for something he didn't tweet. Spider-Man – No Way Home: Tom Holland Reveals the Real Title of His Marvel Movie After Teasing Fans (Watch Video)

Holland himself shared a few of the tweets where people admitted they were confused between the two. One even went on to say #BoycottSpiderman!

Check out his responses and tweets here...

I’m a huge admirer of the modesty Modi showed in naming the world’s largest cricket stadium after himself.

He himself shared a few reactions...

Here are some more...

Oh dear - I seem single-handedly to have destroyed prospects for the next Spider-Man in India. https://t.co/VKrO2O8PeO

Just for the record, & to save Marvel’s profits in India, I freely acknowledge that Narendra Modi is a man of immense humility, and that his naming the world’s largest cricket stadium after himself is in no way quite hilariously immodest.

Meet some worried fans of the Spiderman Holland

They're going to trend #BoycottSpiderman , aren't they? 😭

Tom Holland ( spider man) the actor be like 😂 pic.twitter.com/y7WMWSVAtZ

It's really nice to see how Twitterati is throwing its weight behind Tom Holland, the actor, by making people aware they aren't the same. Hope their concerns don't become real.

(The above story first appeared on LatestLY on Feb 25, 2021 03:56 PM IST. For more news and updates on politics, world, sports, entertainment and lifestyle, log on to our website latestly.com).