A picture of Bernie Sanders, wearing casual sweater and mittens, sitting grumpily with his hands folded over one another has become the target of funniest memes online. Along with the playing of Despacito at the event virtually by Luis Fons and Ozuna has also got people talking. We bring you the funniest memes from US Inauguration Day. 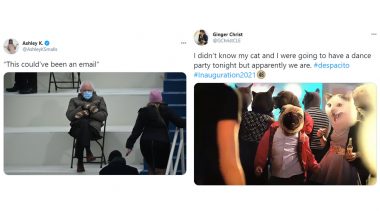 January 20, 2021 was a big day for everyone not just in US, but even those around the world who watched the swearing-in of Joe Biden as the 46th President of United States. And it is not surprising to see it trending all over Twitter today. But while people celebrate Joe Biden and Kamala Harris taking over as US President and Vice-President, it is Bernie Sanders' who is making people laugh. A picture of his attire choice, wearing casual sweater and mittens, sitting grumpily with his hands folded over one another has become the target of funniest memes online. Along with the playing of Despacito at the event virtually by Luis Fons and Ozuna has also got people talking. We bring you the funniest memes from US Inauguration Day.

For the big day, all important personalities of the event chose formal outfits, the women rocking purple and making a statement, men wearing black coats but Bernie Sanders chose casual, sweaters and mittens. Everyone was pumped up to see the event unfold, but Vermont Senator and former Presidential contender Sanders sat alone grumpily, atleast, that's how he looked like in one picture that is going viral as the latest meme target. Among the many celebratory tweets, is the image of Bernie Sanders being photoshopped in different places and shared as funny meme reactions online.

Check Funny Memes and Jokes on Bernie Sanders on US Inauguration Day:

It Could Have Been an Email!

“This could’ve been an email” pic.twitter.com/kn68z6eDhY

Not The Whole Day Event

Bernie dressed like the inauguration is on his to do list today but ain’t his whole day. pic.twitter.com/wCRyoxU3V2

Bringing in the Grandpa Energy

I see everyone mocking Bernie's "grandpa at the post office" vibe today but those mittens are clutch pic.twitter.com/cVwINTnqR6

Another thing that caught people's attention was the Despacito performance at the event. Joe Biden had played the song during one of his campaign in Florida. So his love for the song was much known.

Having a Dance Party in Middle of Inauguration

I didn’t know my cat and I were going to have a dance party tonight but apparently we are. #despacito #Inauguration2021 pic.twitter.com/cohaSjfULN

The Lyrics of Despacito

Me in my living room jamming like I know the words to #despacito #InaugurationDay pic.twitter.com/kjKIfmm3eS

Me when I hear #Despacito featured as part of the official #Inauguration celebration: pic.twitter.com/JrNAGnaBcu

No one expected the club song to play in middle of the political transition of power, did they? But people are all for it. While Bernie Sanders kept it too causal, the surprise of Despacito performance hyped up the viewers. So US Inauguration Day kept an unlikely balance in the form of memes and jokes online.

(The above story first appeared on LatestLY on Jan 21, 2021 10:51 AM IST. For more news and updates on politics, world, sports, entertainment and lifestyle, log on to our website latestly.com).