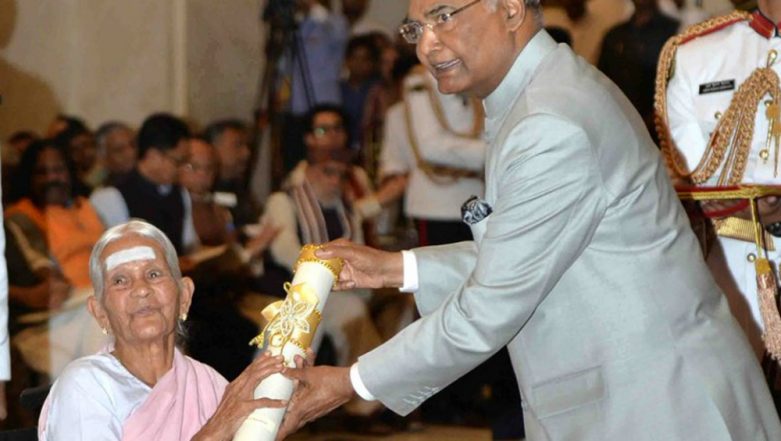 The power yoga expert makes her way to the most honourable achievement, Padma Shri. 99-year-old V Nanammal received the prestigious Padma Awards from the President of India, Ram Nath Kovind at Rashtrapati Bhawan on March 20, 2018. She has been teaching yoga to thousands of people of all age groups, spreading the ancient traditional practice across Tamil Nadu. The oldest Indian yoga proficient believes that it is not about rigorous activity or getting sweaty and breathless. The stretches in its true form are all about peace and relaxation and this is what she is practising every day.

Nanammal has received many accolades for her teaching. It is not just her, but her entire family are yoga practitioners, including her children and grandchildren. Nanammal was only eight years old when she started to learn the basics of yoga from her father, who was a martial artist. In the hustle and bustle of life we wait for the weekend so that we can cheat on our diet, get up little late and enjoy our holiday. The 99-year-old still follows a lifestyle that is close to nature. An early riser, Nanammal drinks nearly 500 ml of water as soon as she wakes up, uses neem sticks to brush her teeth and even carries them whenever she goes out of town.

In a pink saree, chandan covering most of her forehead see how V Nanammal effortlessly curl into any yoga asana you name.

To this day, she has never stepped into a hospital. Nanammal seems healthier than most millennials! The family teach their traditional style of yoga at the Ozone Yoga centre in Coimbatore which they established in 1972. Reports suggest that over the past five decades, Nanammal has trained more than 10 lakh students. In 2017, Nanammal was bestowed with the Nari Shakti Puraskar by former President Pranab Mukherjee on International Women’s Day.