Pakistan Human Rights Minister Shireen Mazari took to Twitter asking if anyone could identify the woman. 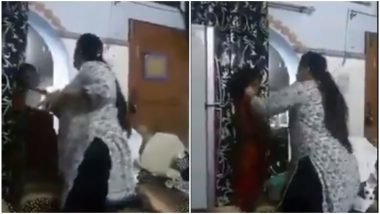 Video of a woman hitting a minor girl has gone viral on social networking platforms. The clip shows an unidentified woman slapping a child for using excess tea leaves while making tea. She had can be heard asking her why she used so many tea leaves unnecessarily. The mistress of the house then goes on to hit her on the head and pulls her hair. She even slaps the child on her cheek.

She then tells that the tea leaves could have been used to make tea for more than ten people. While the little girl can be seen wiping tears, the woman continues to pull her by hand and hit her on her back. The woman's merciless act has resulted in a social media uproar alerting human rights activists. Maharashtra Woman Kills 10-Month-Old Son as She Wanted Girl Child; Body Found in Water-Filled Drum

Pakistan Human Rights Minister Shireen Mazari took to Twitter asking if anyone could identify the woman. Mazari tweeted saying, Can anyone help identify who this woman is and where she is based? Need this info to act." Twitterati across countries questioned the women's sensibilities how she could physically abuse a child when she has one herself.

Can anyone help identify who this woman is and where she is based? Need this info to act. https://t.co/7sqbZuawvD

The man recording the video can be heard saying, "You hired a 14-year-old in the first place and you are beating her up." The woman not affected by the man's comment continues to shout at the girl. She orders her to keep the vessel back in the kitchen and go to a room. The woman says she doesn't want to see her and to get away from her sight. (We at LatestLY could not confirm the authenticity or origin of the video.)

(The above story first appeared on LatestLY on Sep 10, 2018 09:56 PM IST. For more news and updates on politics, world, sports, entertainment and lifestyle, log on to our website latestly.com).